Lorenzo Santolino blitzed the sandy terrain of Jaisalmer on his Apache RTR 450EX to clinch the crown in the 2018 iteration of India Baja, one of the demanding rally events in the country. India’s star rider, CS Santosh of Hero MotoSport, came in second while TVS Racing’s Abdul Wahid Tanveer, who won the ticket to Dakar Rally 2019 at last year’s edition of the rally, rounded off the podium in Moto category this year. In fourth place was yet another TVS Racing rider, Harith Noah, who actually came in third in final standings before Tanveer successfully contested a time penalty that he received.

Things got off to an ominous start at the India Baja 2018. The day before Leg 1 was due to start, Asbak Mon, a racer from Team Angata Racing, took off with fellow team racers to explore the surrounding countryside and conduct some practise runs. When he didn’t return late into the evening even as the rest of the riders did, his team alerted Northern Motorsport, organisers of the event. Race officials and even riders, including CS Santosh, who were taking rest in anticipation of the race early the next day fanned out into the desert to conduct a search. The search party, who was cut off from base command and the police during this time due to lack of mobile coverage, returned without finding Asbak. 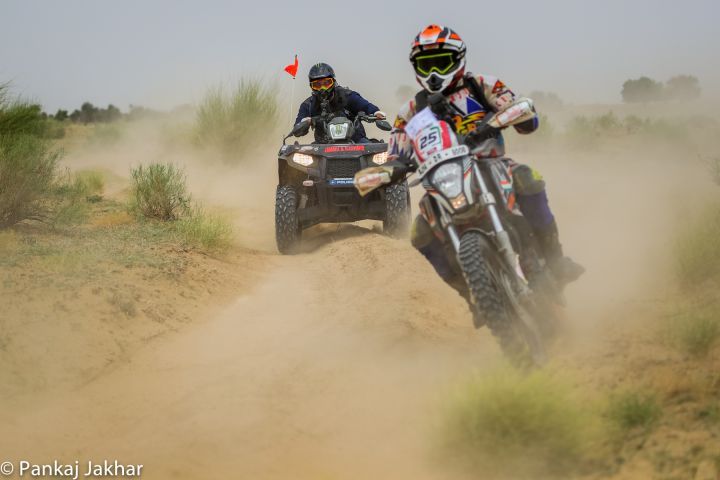 Search resumed the next day, this time combing an even wider area. Asbak was eventually found dead beside his bike in the desert 200km from Jaisalmer. His body was taken by the local police to the mortuary where dehydration was attributed as the cause of death. Asbak’s empty water bottle was found lying beside him.  The 34-year-old Asbak Mon hailed from Kerala’s Kunnur district, and is survived by his wife and father-in-law.

Yet another event cast a shadow over the 2018 India Baja when sudden rains forced the cancellation of the ceremonial flag-off on Friday, 17 August. However, the race got off without a hitch early the next day, with the first of the Moto category racers roaring off into the breaking dawn followed shortly by the Xtreme (cars) category. 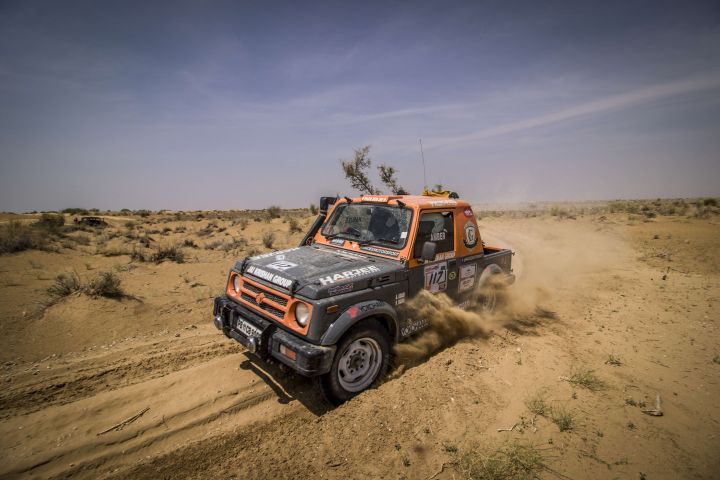 Day 1 was divided into three special stages (SS). SS 1 started from Majid Ki Basti and travelled till ‘RD 40’ in Jaisalmer, SS 2 ran from Asutar road to Bhuwana, while SS 3 ran from Majid Ki Basti yet again to a different destination at Buwana.  In what turned out to be a precursor of the final result, Lorenzo and Arindam came first in their respective categories, showing everyone who were the top dogs this year. Even more significantly, Arindam piloting a Polaris XP1000 quad, was showing a clean pair of heels to the Gypsys and the Pajeros that have traditionally dominated the event.

Leg 2 of the competition, consisting of SS 4 and SS 5, started early on Sunday and ended at around 2 PM. When the dust settled, it was Santosh who actually finished ahead of Lorenzo despite setting off from the start in second place.  Santosh had somehow managed to finish SS 5 in almost half the time it took Lorenzo, leading the officials to impose him a 30-minute penalty, thus awarding the Sherco TVS Racing rider from Spain the crown. Arindam Saikia, the racer from Assam who started the championship as the underdog, took top honours in the Xtreme class. 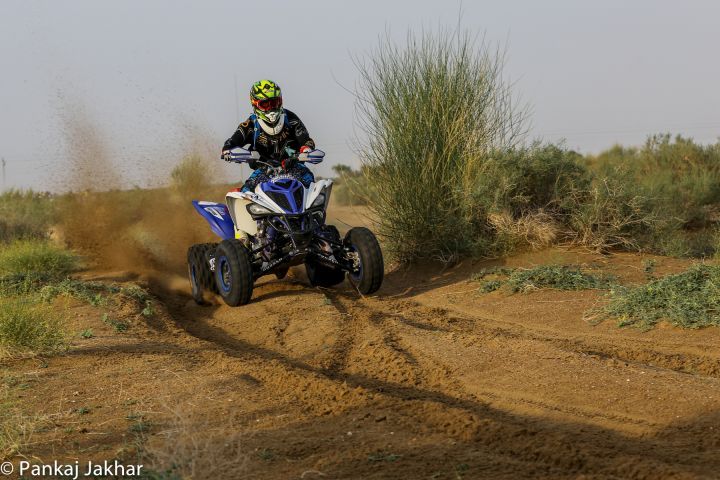 Held over 650-odd km of the Thar Desert that the competitors had to tranverse in just below 48 hours, the 2018 iteration of India Baja saw significant changes to its setup  – a conscious effort by Northern Motorsport to bring it more in line with its international counterparts. The lack of GPS waypoints this year meant that competitors had to rely on their notes for navigation, thus making the event even more challenging than it already is. Then there’s the increased usage of French words and terms in the official race logs, since French is the dominant language in most rally races.

But for now, the ultimate aim is not France but Peru in South America. India Baja is one of the five ‘Road to Dakar’ Challenges in the world, which means its winner gets a direct free entry  to the 42nd Dakar Rally to be held in 2020, and a complimentary entry to the 2019 Afriquia Merzouga Rally in Morocco. Winning the India Baja nets the victor a prize money amount of roughly €20,000 (about Rs 16 lakh), which covers the registration fee for one motorcycle in both the events.