M-Sport Ford World Rally Team are packing their gear and heading to the second round of the season at Rally Sweden. After a disappointing season-opener at Rallye Monte-Carlo, they are hoping to deliver stronger results at the only snow event of the year. 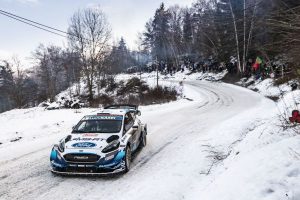 The team are fielding three cars at this event, with the Finnish line-up of Esapekka Lappi and Teemu Suninen in two cars in-front and the Lithuanian gentleman driver Devidas Jocius in the third car, Jocius made his debut with the team at Rallye Monte-Carlo.

M-Sport had successful years in the past in Sweden, with six victories and 24 podium finishes since the start in 1997, the team also claimed their 250 point scoring at Rallye Monte-Carlo earlier this year.

Beside the WRC cars, the team will be fielding two Ford Fiesta R5 MKII cars in WRC2 class with Frenchman Adrien Fourmaux and the Brit Rhys Yates.

Rally Sweden will also mark the season-opener for the Junior WRC category where the drivers are entering in the single-make class with M-Sport Poland built Ford Fiesta R2T19 cars.

“Rally Sweden is an iconic event in the FIA World Rally Championship, and I think we’re all grateful to Glenn [Olsson, Rally Sweden CEO] and his team for all their hard work in ensuring it goes ahead in what have been some very challenging conditions. “ Richard Millener, Team Principal, said.

“It’s not been easy with the mild weather, but the organisers have been extremely proactive over the last few weeks – working closely with the teams and the FIA and ensuring everything’s in place to deliver another close-fought rally. It will be a very different event to what we’re used to, but the main thing is that we will have an event.”

“Historically this has always been a strong rally for us, and we’re confident of another strong showing next week. Esapekka and Teemu both did well here last year – Esapekka claiming the runner-up spot and Teemu leading a rally for the first time in his career.

“The Fiesta was also very competitive with five stage wins, and we plan to replicate that this year. Due to delays with the event finalisation, the team will get their first taste of the conditions at a pre-event test this weekend – but that should give us an accurate and up-to-date view of the expected conditions; and we’re ready show what we can do.” Millener added.