Sebastian Vettel’s title hopes were dealt a near-fatal blow by his first-lap crash in Singapore, but the Ferrari driver says he will not change the way he drives ahead of the Malaysian Grand Prix. 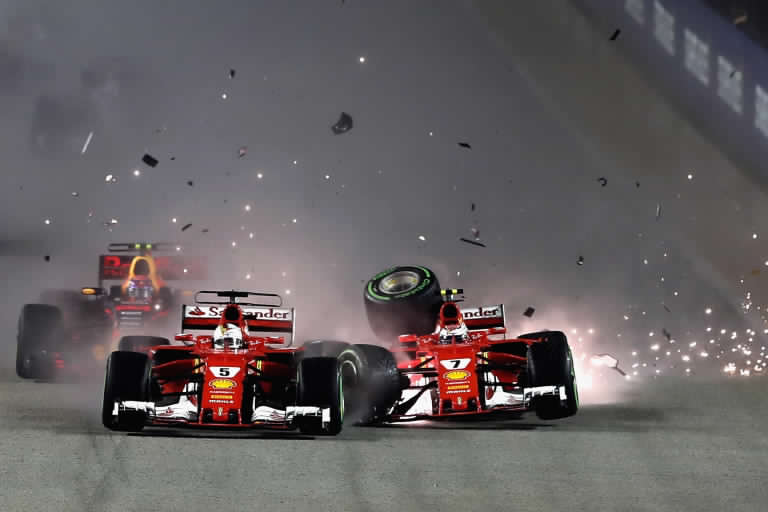 A defiant Sebastian Vettel vowed Thursday not to change the way he drives despite his first-lap exit in Singapore as he prepares for Sunday’s last-ever Malaysian Grand Prix.

Vettel’s Ferrari started from pole but was involved in a crash at the start that also took out team-mate Kimi Raikkonen and Red Bull’s Max Verstappen on a rain-soaked Marina Bay Circuit.

It allowed Lewis Hamilton, who avoided the carnage to win from fifth on the grid, to extend his championship lead from a slender three points to 28.

“I’m not too fussed about the amount of points,” Vettel told reporters at the Sepang International Circuit.

“Obviously it’s never good to be behind, we’d like to be in front, but we’re not, so we’ve got to take it from there.

“Overall it doesn’t change anything for how we tackle the last six races.”

Vettel was exonerated of blame for the Singapore crash by stewards, but many observers felt the German four-time world champion was at fault as he had forced Verstappen towards Raikkonen.

But Vettel said that he hadn’t given the crash much thought since because it was just “part of racing”.

“I think it would have been more difficult if I had lost the car somewhere in the race, then it’s obviously different,” he said.

“The lights went off, we did our start. Everyone was trying to do his start and with the way it happened it ended up really bad for all of us. There’s not much you can do. I think it’s part of racing.

“It certainly didn’t help Lewis score a lot of points but that’s the way it goes. What’s done is done.

“It’s not the first time I’m in the situation like this and probably will not be the last time — not that I’m hoping for it to happen again.”

Raikkonen said there was no point in dwelling on what happened and that Ferrari could still take plenty of positives from Singapore.

“In Singapore Sebastian was first and I was fourth in qualifying so if you compare it with Mercedes we were better,” Raikkonen said. “Then we basically didn’t race.”