Marc Marquez admits he feels pain “everywhere” after his bruising FP1 spill but remains competitive so long as he “concentrate[s] and forget[s].”Marc Marquez has recalled the immediate aftermath of his horrifying FP1 high-side in Buriram when he “couldn’t breathe … [for] around five seconds” and admitted the incident was “more my mistake” than any other factor.

The reigning MotoGP world champion was flung violently from his Honda RC213V at the close of a session which he dominated for the most part. The heavy impact hurt his neck, back and left pelvis, triggering a visit to a local hospital. 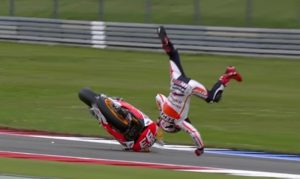 MRI scans concluded the 26-year old hadn’t broken any bones and he returned in time for FP2, another session in which he showed considerable flex. He may have ended the day sixth, but leading names remain wary of Marquez’s pace.

All of which was quite an effort for a rider than struggled to breathe earlier that morning.

As he recalled, “Of course we didn’t start the Thai GP in the best way. But it’s true that I had a strange but big crash this morning, and it was a long time without a highside in MotoGP for me.

“Especially it was around five seconds that I couldn’t breathe. For that reason, I was there on the floor, in the gravel. And it’s only five seconds, but for me it was like twenty seconds there, because it was a big impact.

“And it’s true that then, step by step it was coming better and better, and when I arrived in the medical center, I was already OK. But then of course, I understand that the doctors tried to manage the situation in the best way, in a safe mode, and they preferred to have a deep scan to look at all these things.

“So we went to the hospital, but the most important thing is that I’m OK, painful everywhere. But the biggest thing after the crash was that I couldn’t breathe, so this was the main problem.

“[Now] Where I have the most pain is in the back. In the back, when I breathe, I have some pain there. But in FP2 in the first laps I felt something, but then if you just concentrate and forget, then it’s OK.

“So yeah I have pain in the pelvis, I have pain on the knee. But the most important is that we had a big scan of the body and there was nothing broken. Just a big contusion, and that’s it.”

On the cause of the spill, Marquez offered, “It’s a small difference. And now you will understand immediately, because I went out from the box. The first thing I did after hospital is check why I crashed, and then of course I was much slower than the normal laps, because I was exiting from the box.

“It was new tyres, of course maybe the track was not clean enough, this is normal. But the main difference is that normally in that corner, we don’t close completely the gas. We close the gas a bit, but we don’t close. And in that lap, I closed the gas.

“When you close the gas, the engine brake is going in, and then is when I locked the rear. So it’s not a mechanical problem, it was more my mistake. But it was because I was riding slow.

“But for me more than this change in the riding, it was more maybe the tyre was not ready or maybe I was a bit on the dirty part of the track. So it’s difficult to understand.

“I closed [the throttle] completely, because I went out from the box and I was not pushing. And when you close completely, then maybe the settings are not the best … I mean just the engine brake is going in, and then I just had a highside.

“But in some laps, when I am racing fast, I also close completely, and nothing happened. But that time, maybe I was in a dirty place on the track or something like this.”

On whether such an incident changes his approach through a race weekend, Marquez added, “Of course it changes something. But it’s not that I was pushing crazy because it was the out lap.

“But then OK, apart from that, we just worked for the race distance in FP2 with the same tyres we used all the practice. And of course all the Repsol Honda team did a great job because I destroyed the bike, completely destroyed it.

“Even like this, they didn’t have enough time to prepare the second bike for FP2, and I was riding only with one bike. But it was better, because these bikes, when we have these kinds of crashes, it’s better to be safe about all the things.”