Harry Tincknell took advantage of his teammate Oliver Jarvis’ misfortune with 27 minutes remaining to win Saturday’s 68th running of the Mobil 1 Twelve Hours of Sebring for Mazda Motorsports, capping a night of heartbreak for many of the top contenders.

Mazda won the battle with Tincknell, Jonathan Bomarito and Ryan Hunter-Reay in the No. 55 Multimatic Motorsports-prepared RT-24P, but Acura Team Penske won the war, with Helio Castroneves and Ricky Taylor taking the DPi title by one point despite finishing eighth, seven laps down in the No. 7 Acura.

The No. 6 Team Penske Acura ARX-05 of Dane Cameron, Juan Pablo Montoya and Simon Pagenaud finished second, 10.154s back, followed by Jarvis, Olivier Pla and Tristan Nunez in the No. 77 Mazda.

The championship was a career first for Castroneves, despite winning the Indianapolis 500 three times.

“It’s amazing to finish the championship with a great organization, a great group of people,” Castroneves said. “It’s a new beginning for me, but I will never, never forget this. It was an incredible journey, for sure.”

“To me, Helio is Team Penske, and it was the privilege of a lifetime to get to drive for Acura Team Penske,” Taylor said. “To win it with him was one of the highlights of my life.”

Pla took the lead in the No. 77 RT-24P with 2h25m remaining, passing then-championship-leading Pipo Derani in the No. 31 Whelen Engineering Cadillac. Derani needed to win in order to take the title. But after making contact with Montoya’s race-leading No. 6 Acura in Turn 7 at the 9h31m mark, Derani dive-bombed Montoya in Turn 5 on the next lap, sending the Acura spinning.

Derani took over the lead, only to be passed by Pla on the following lap. Derani then went to the pits to serve a drive-through penalty for incident responsibility.

Returning to the race, Derani went to the grass as his steering failed due to a broken right-front suspension part. He returned to the pits and lost two laps for repairs, effectively ending his chance at the title.

From that point, Pla and Jarvis pulled away. Jarvis was leading by 30 seconds when he cut his left-rear tire, sending him on a ride through the grass. The caution waved for the ninth time due to debris from the tire, which gave the advantage to Tincknell.

The green flag waved with 17m30s remaining, the Mazda home free although an incident took out the leaders in both the GTLM and GTD classes.

“What a position to be in – 20 minutes to go, and leading one of the biggest races in the world,” Tincknell said. “I was just going to give it everything – no regrets – and see what happens. We’ve had our ups and downs this year, and what a way to end it.”

“This is the overall win I’ve been looking for,” said Florida native Hunter-Reay. “This is my home race, and I’ve always dreamed of winning this overall.”

“It’s a shame, because the No. 77 had pretty much a dominating lead,” Bomarito said. “But it’s motor racing. We all ran hard, all race long, and now we have two Mazdas on the podium. This is one of the most physical races.”

The No. 7 Acura entered the race with a two-point lead, and led up until its first pit stop. Ricky Taylor then lost boost at the 45m mark, and went to the paddock to have the intercooler of his left turbocharger replaced, costing him 11 laps in the end.

That put the No. 10 Wayne Taylor Racing Konica Minolta Cadillac in the championship seat. Disaster struck that team, though, at the 4h50m mark, when Scott Dixon spun in Turn 7 after contact with the No. 77 Mazda of Oliver Jarvis.

Dixon lost five laps in the paddock getting a new radiator; Briscoe and van der Zande finished second in the standings, one point back.

The No. 10 Cadillac did manage to win the Michelin Endurance Cup for Briscoe and van der Zande, ending Action Express Racing’s six straight titles since the competition among IMSA four longest races began in 2014.

Lost in the shuffle was a strong showing by JDC-Miller Motorsports, which had both of its cars lead the event. Scott Simpson, Matheus Leist and Scott Andrews took fourth in the No. 85 Cadillac, one position ahead of teammates Sebastien Bourdais, Tristan Vautier and Loic Duval in the No. 5 Mustang Sampling entry.

The competitive race saw all eight DPis takes turns in the lead before the race reached the 10-hour mark. The last to lead? The eventual winning No. 55 Mazda. 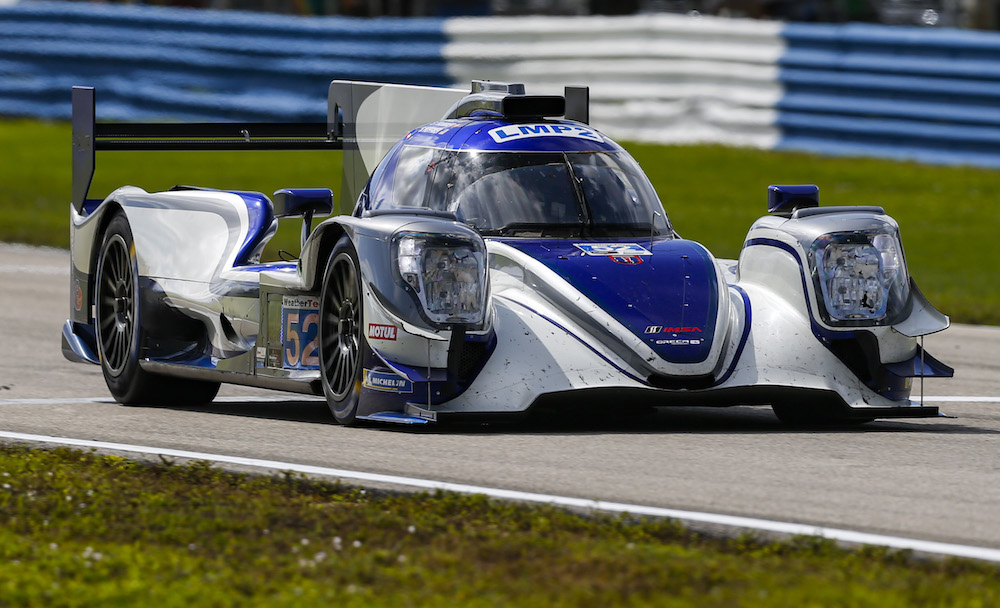 The LMP2 contest came to an abrupt halt when the leading No. 51 Inter Europol Competition ORECA driven by Jakub Smiechowski slammed into the Turn 17 wall at the 5h34m mark. That gave the lead to the No. 52 PR1 Mathiasen Motorsports ORECA LMP2 07-Gibson of pole winner Patrick Kelly, Simon Trummer and 2019 Team USA Scholarship-winer Scott Huffaker. The trio went on to win by two laps over the Performance Tech Motorsports No. 38 entry of Patrick Byrne, Guy Cosmo and Don Yount.