Toto Wolff says Mercedes will never be able to fully replace Niki Lauda, detailing the impact that the F1 legend’s passing has had on the Silver Arrows’ latest successful campaign. GPFans has especially linked up with online bookmaker Mr Green to give every Formula 1 fan a 10 euro free bet. Who do you think that would win the race of Abu Dhabi?

Mercedes have secured a sixth straight title double in 2019, a new F1 record, with Lewis Hamilton securing a fifth drivers’ championship in that run.

Lauda’s health problems hung over the early months of the campaign, the Austrian having fallen ill last year, which necessitated a lung transplant.

The former world champion passed away in May, leading to widespread tributes at the Monaco GP. Mercedes have carried tributes to Lauda on the W10’s livery since his passing.

Wolff says Lauda’s passing, as well as those of former F1 race director Charlie Whiting and F2 racer Anthoine Hubert, have offered an aspect of context to the Silver Arrows’ achievements.

“This season has been a real rollercoaster for us,” Wolff said. “We’ve seen great on-track battles and we’ve loved the competition.

“We are very proud that we came out on top and managed to put the Mercedes name in the history books of Formula 1 with our sixth consecutive double title. 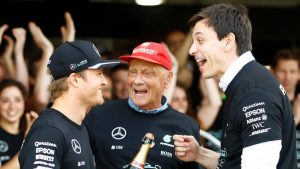 “On the other hand, it’s been an incredibly hard year where we had to say goodbye to too many friends.

“We were hit hard by the passing of Charlie, Niki and Anthoine, as well as important members from our team who we have tragically lost this year.

“At Mercedes, Niki left a void that we will never be able to replace – as a source of inspiration, as a voice of reason, but most importantly as a great friend. We hope we did you proud, Niki.”