Skip to content
Movistar Yamaha’s Jorge Lorenzo believes this could be his year to clinch his third MotoGP crown after making it three wins in a row with a dominant victory at Mugello. Lorenzo has closed the deficit to team-mate Valentino Rossi at the summit of the championship to six points after the first six rounds and is now heading into his home race at Catalunya in two weeks’ time. 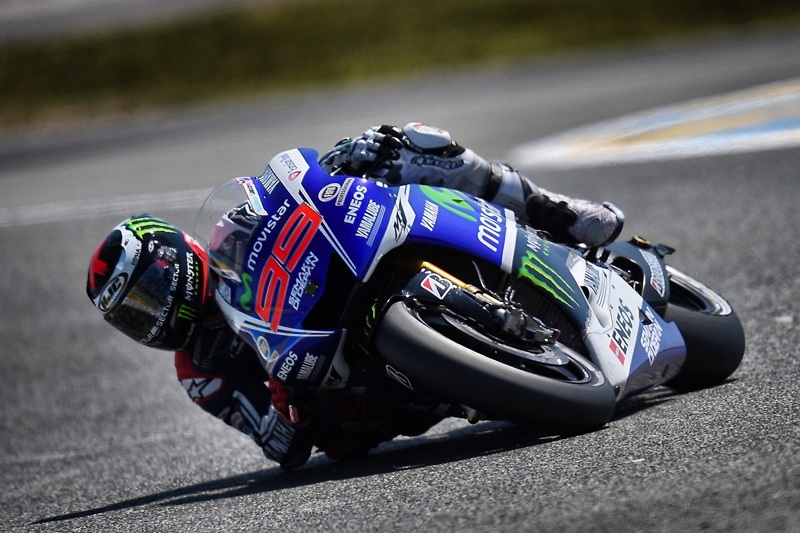 The two-time premier class champion is back to his brilliant best on the factory M1 and currently looks unstoppable after completing a faultless treble to pocket a maximum 75 points from the last three races to boost his confidence of winning the world title in 2015.

“I thought on Saturday that this can be our year but it is still very soon to say that we are going to win or keep this level, because the championship is very long still,” said Lorenzo.

“For sure the other riders are going to improve and they are going to come, but five victories of six [for Yamaha] means something and our bike is working very well.

“Here, the Ducati seems very strong and after the warm-up Andrea [Iannone] seems very strong, but today at two o’clock it was not the same. Something changed on the track and it was impossible to be in 1’47.5 and we had to go 1’47 high and lucky for me the other ones were in 1’48,” he added.

“That was my lap today and I was able to leave [them] behind more easy than I expected and in some laps [open] even six, seven tenths, so when this happens you know inside yourself it is your day and you have to take profit of the opportunity.”

Lorenzo took the lead on the opening lap and seized his chance to put Andrea Dovizioso between himself and Andrea Iannone, who Lorenzo expected to be his chief threat in the race.

“The start was not so good and I lose my position with [Andrea] Dovizioso, but in the first corner I could open the line a lot to make a very high corner speed and I overtook Andrea on the outside,” he said.

“I knew that probably Iannone was stronger today than Dovizioso after warm-up so it was my chance to pass Dovizioso and put him between me and Iannone.

“I overtook him before the first Arrabbiata and I tried like crazy to pull this gap.”

Dovizioso, having done his best to stay with Lorenzo during he early stages, explained:

“Today, like the last race, the race before – it is really, really difficult to fight with Lorenzo because he is strong in every area when he is riding like this.

“He can be fast in the first lap, but the main point is his consistency. I mean his fastest lap wasn’t amazing, but he is able to keep [the lap time] – it looks from the outside – in an easy way. And that is the difference.

“Because in the first few laps the lap time was very similar between me, Marc and Jorge. But we couldn’t continue with that rhythm.”

Lorenzo has dramatically reduced Rossi’s lead – who finished on the podium in third behind Iannone – to six points ahead of his home race, but he has vowed to stay grounded despite his magnificent run of form.

“Valentino is making an unbelievable season and is always on the podium and luckily for me today Iannone stayed in front of him so it was four points more,” said Lorenzo.

“It is difficult to recover to Valentino even though I have won three in a row but it is much better to be six points behind than 29, so we make a great job these races to recover these points.

“But anything can happen at Montmelo and I can lose points, I can finish behind Valentino, the Ducatis or Marquez, so I have to keep the feet on the ground, keep working, Yamaha will keep working and this could be our year, so we have to take profit.”