Marc Marquez took his ninth win from nine races in the 2014 MotoGP season despite starting from the pitlane at the Sachsenring.A rain shower as the riders headed to the grid meant everyone expected to start on wets, but the track dried rapidly. 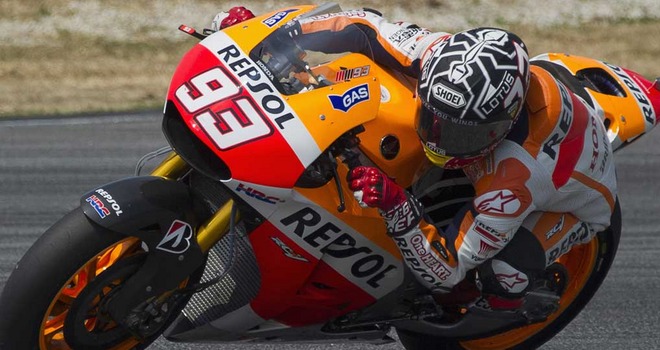 Third-place starter Stefan Bradl and a handful of backmarkers switched back to slicks before the formation lap, while everyone else immediately realised they had to and dived for the pits to change bikes rather than lining up on the grid.

That led to the surreal sight of Bradl’s LCR Honda alone in the top half of the start straight, with a massive gap back to Hiroshi Aoyama in the 16th place slot, while 14 of the 23 riders – including all the works riders – crowded five abreast into the narrow pit exit.

Bradl therefore led at the end of the first lap by three seconds over a second-place battle between Michael Laverty, Danilo Petrucci and Hiroshi Aoyama, with Marquez 10th and the first of the pitlane starters.

Marquez rapidly tore through the field, taking Honda teammate Dani Pedrosa with him, and by lap six they were passing Bradl for the lead. Pedrosa clung on behind Marquez for the first two thirds of the race, but then Marquez managed to get the gap above a second for the first time, and was untroubled thereafter.

The Yamahas took longer to make it through the pack, with Jorge Lorenzo and Valentino Rossi eventually reaching distant third and fourth places.

Andrea Iannone was the top Ducati in fifth for Pramac, ahead of the Espargaro brothers, as works Ducati riders Andrea Dovizioso and Cal Crutchlow ended up eighth and 10th after huge battles with the Espargaros, Crutchlow and Scott Redding.

Of the early stars, Aoyama fell back to 12th, while the plucky Petrucci – who gave the works riders the hardest fight – at least salvaged a point in 15th.

Bradl had only swapped for dry tires on what was otherwise a wet setup bike, and had terrible race pace as the grand prix progressed. The early leader and home hero tumbled all the way back to 16th.

Despite the tricky conditions, Laverty was the only man to crash out. Bradley Smith had his fifth fall of the weekend, but recovered to 19th.