The all-female W Series is launching an Esports League for women drivers only in the absence of any on-track action due to the COVID-19 pandemic.

With its second season on hold and no start date set, organisers hope to maintain the series’ profile and encourage more women to compete in the male-dominated virtual world as well as the real one. 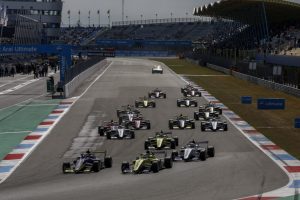 “We intend to stage on-track W Series races once the global COVID-19 crisis has subsided, whenever that will be, but in the meantime we’re delighted to have created the next best thing,” said advisory board chairman David Coulthard in a statement on Thursday.

All 18 drivers who qualified for the regular W series season, which was scheduled to start in St Petersburg, Russia, on May 29, are expected to race from their homes on identical simulators.

W Series did not set a date for the start of the League but said they will use the iRacing platform in partnership with Logitech G and tournament hosts Beyond Entertainment.

Virtual racing has become a crowded marketplace since the pandemic swept the world, with most championships streaming their own online races but with few women involved.

British-based Women in Games estimated in 2018 that the number of women working in any role in esports or playing esports was around 5% or 1 in 20.

Market research firm Interpret said last year, however, that 30% of esports viewership and 35% of esport gamers were women and numbers were growing.

Britain’s Jamie Chadwick, the W Series champion, is active with Veloce esports and has competed against Formula One drivers like Lando Norris and Charles Leclerc.

The 21-year-old told Reuters in December that attitudes needed to change.

“I think maybe the esports world is a bit slower even than motorsports in coming around to the idea of women being a part of it,” she said then.

Formula One has not had a woman race since 1976 and its esports series has yet to have a female finalist in three editions.

Drivers will race simulated 2.0 litre Tatuus Formula Renault cars with points awarded and up to three races per circuit. No decision has been made on prize money.