In just a few short F1 seasons in the 1960s, Jim Clark carved out his reputation as one of the greatest of all time. His grand prix career was conducted entirely with Colin Chapman’s Team Lotus, with whom he made his debut at the 1960 Dutch Grand Prix. But that hadn’t been the original plan at all. He was supposed to be racing the front-engined Aston Martin in F1 that year, combining it with a Formula Junior and F2 programme for Lotus. But Aston didn’t have his car ready in time for Zandvoort and there was a spare seat at Lotus because John Surtees had decided to prepare for the upcoming Isle of Man TT races instead.

But even that complex back story needs some further explanation to put it in its true perspective. The early F1 careers of Surtees and Clark were tightly intertwined. At 25 and 23 years old respectively at the start of 1960, they were the red hot, up and coming prospects of racing, with Surtees perhaps seen as a little less raw because of his extensive bike racing accomplishments at the highest level, though he’d yet to even race a car. Clark had driven in his first club race just three years earlier and was still very inexperienced, though already creating a sensation with his speed in a variety of sports cars.

Surtees was new to car racing. He been invited by Aston Martin’s Reg Parnell for a four wheel try-out in the DBR1 Le Mans car at Goodwood, late in ‘59. This triggered a further invitation a couple of weeks later by Vanwall in its 1958 F1 machine, also at Goodwood. In both tests he was quite extraordinary, lapping marginally faster than the best times each car had ever set around there with Stirling Moss at the wheel. Surtees turned down Parnell’s offer of driving the Aston F1 car in 1960. Vanwall’s Tony Vandervell was more persuasive.

Without a mid-engined car of its own, Vanwall’s 1960 plan was to campaign a Lotus 18 with a Vanwall engine. That programme barely got started as Vandervell was suffering ill health but in preparation for it, Colin Chapman suggested that Surtees should try out the works Lotus 18 in a test at Silverstone. Chapman was so impressed that he offered Surtees a seat in F1 ‘whenever I could make it’ in between his Vanwall and motorcycle commitments with MV Agusta. 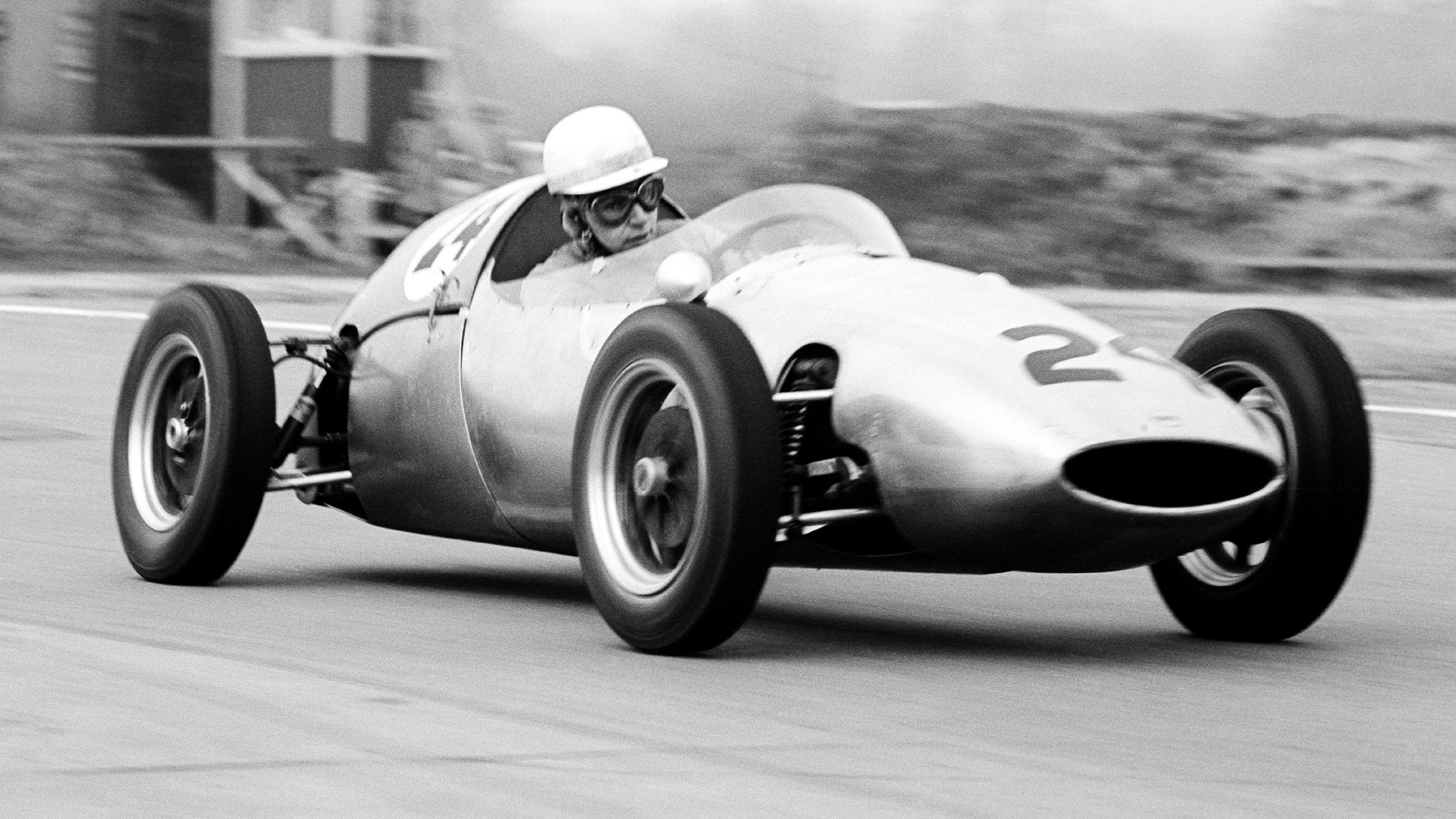 But before making his F1 debut later in the year, Surtees he felt he should at least have some car racing experience… So he bought himself a Formula Junior Cooper and entered it for the Goodwood meeting in March but it couldn’t be readied in time. In stepped Ken Tyrrell (who’d been tipped off by John Cooper), to loan Surtees his Tyrrell team Cooper-BMC. On the event of his first ever car race Surtees qualified second-fastest, marginally slower than the works Lotus-Ford Formula Junior car… driven by Jim Clark, who was having his second ever single-seater race! Clark was also getting in single-seater practice ahead of what was set to be his F1 debut – with Aston Martin! When Reg Parnell had been turned down by Surtees for the F1 Aston drive, he had quickly signed up Clark, who’d made a big reputation in British sports car racing in ’59 with a Lister-Jaguar.

So as they sat on that Goodwood front row, their paths were already crossed. Even before Surtees had tested the Lotus, Clark was already there, having raced an Elite sports car for the team in ’59. His success there had led Chapman to sign him for his 1960 Formula Junior and F2 teams. He’d wanted to put him in the F1 car too, but Clark had to turn that down – because he’d just signed an F1 contract… with Aston Martin, the drive that Surtees had turned down. So Surtees had got an F1 chance with Lotus because Clark had to turn it down because of a prior Aston commitment that had materialised as a result of Surtees turning it down!

So the intense synchronicity of Clark and Surtees all came to a point on that Goodwood Formula Junior front row. Here’s how Surtees recalled that race: “I managed to lead away on the first lap into Madgwick. On the second lap Jimmy came past me, but then I made a small mistake and tried to [repass Clark] in a gap that was a bit too narrow on the fast right-hander after the pits. That dropped me back a little and although I briefly slipped into the lead again on the fifth lap, I then dropped back to third. However, I managed to pip Trevor Taylor in the other works Lotus to take second on the last lap.” Clark won.

After a few more Formula Junior and F2 races in Ken Tyrrell’s Cooper, Surtees made his F1 debut with Lotus at the 1960 Monaco Grand Prix, two months after that first ever car race. He made a good impression, qualifying solidly in the midfield and running there in the race before the gearbox broke.

Aston Martin was originally supposed to be contesting that race too, with the veteran Roy Salvadori and the rookie Clark. But things had fallen behind schedule at the factory and Clark had to be content with a troubled seventh place in the Formula Junior support race.

Next on the F1 calendar was Zandvoort. Aston had managed to get Salvadori’s new car ready – but not Clark’s. Surtees was down to do the race for Lotus but decided instead to prioritise his MV Agusta preparations for the Isle of Man TT a week later. Hence Clark was drafted into the seat he’d originally turned down. Aston never did get their car ready and withdrew from F1 mid-season. Clark would spend his entire F1 career with Lotus.

Even before Zandvoort, Clark had already begun to make an impression on the international scene in the Lotus F2 car. Here’s how Motor Sport’s Denis Jenkinson described his performance in the F2 Brussels Grand Prix, just prior to the Dutch race. “The most outstanding driver in the second practice session was Scotland’s Jim Clark. After being kept back while Ireland and Stacey were ministered to, Chapman finally let his new boy out in the prototype car and after a few exploratory laps he recorded 2m 06s, fifth fastest overall and easily the fastest Lotus. Needless to say, the car was immediately taken away from him and he was given Ireland’s new car, which, like Gendebien’s Cooper, ‘was too new to go fast yet’! Watching Clark through some of the corners was a real pleasure for he flicked the car into a slide on approaching and took the bend with all four wheels sliding, sitting back and looking comfortable, relaxed and confident; rather like Tony Brooks, an artist more than a beef and brawn driver such as Bristow.”

Like Surtees had in Monaco, Clark qualified the Lotus solidly in the midfield. It’s probably not all that significant, but Surtees’ time was within 102.8 per cent of Moss’s Monaco pole, Clark’s Zandvoort time was within 103.1 per cent of Moss’s pole. “I took it very easy in this my first attempt in a big Lotus,” recalled Clark, “but after 15 laps I had moved up to sixth and began a tremendous battle with Graham Hill in his BRM.” Their dice moved up a place as Moss in second was forced to pit with a puncture. The Clark/Hill battle for fourth place foreshadowed their rivalry in the years to come, but was broken up when the Lotus’ gearbox broke, just as it had at Monaco.

Clark’s was a low-key but promising debut, not really signalling the greatness that lay ahead. But his reputation was already quickly gathering momentum.