Scribante posted a record time of 41.811 seconds on Friday and then raised the stakes to finish in 41.159 seconds on Sunday – not only setting a new record but also making history as the only competitor to win both the Classic Conqueror and King of the Hill titles.

Sunday dawned with not a cloud in the sky, temperatures steadily increasing and the adrenaline-fuelled antics kept the thousands of motorsport fans entertained. It was, however, not until the sun sat low in the sky, the shadows grew long and temperatures began to drop that the serious business of the weekend started.

After two qualifying sessions on Saturday and five on Sunday excitement reached fever pitch with just 10 racers making the cut – one car, one driver, one run and one chance to take the title of King of the Hill. 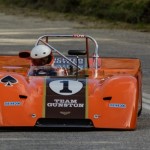 With an entry list that comprised Ferrari, Lamborghini, Porsche, Jaguar, BMW, Nissan, Ariel and Subaru, with a selection of hot hatches thrown in for good measure, the Jaguar Simola Hillclimb provided something for every automotive taste.