The 50th anniversary edition of the SCORE Baja 500 was nothing short of a classic. The roughest, toughest, longest and most spectacular course was put in place to ensure this would be a race nobody will be forgetting in a hurry.

As always the bulk of the fans’ attention was dominated by the Trophy Truck contest as these mighty machines took to the course on Sunday, June 3. Leading from the front was overall winner Rob MacCachren who added to his list of Baja honours. A second victory at the Baja 500 takes MacCachren’s total career SCORE Trophy Truck race wins to 17.

Last year’s Baja 500 winner Andy McMillin was unable to defend his title but did finish in a respectable fifth place overall. After crossing the finish line Andy echoed the conclusion that this was indeed the most challenging Baja 500 he could remember. Watch Andy’s pit crew in action in the desert here.

Andy was also joined in the Top 5 of the Trophy Truck race by his cousins Luke and Dan McMillin who finished second and fourth overall respectively.

“It’s good to finish, honestly, as that was a really gnarly SCORE Baja 500.  It was actually a little slower than I thought it would be, but that speaks to the difficulty.” – Andy McMillin

Andy will return to action at the Baja 1000 in November when the target will be to get back to winning ways in Mexico’s Baja California Peninsula.

Cyril Despres had a memorable first attempt at the Baja 500 on four wheels in a Bryce Menzies-prepared Trophy Truck. Despres, a five-time winner of the Dakar Rally bike race, showed impressive speed and judgement during the pre-running of the course ahead of Sunday’s race. 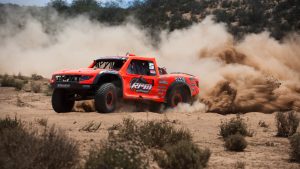 Unfortunately for Despres and his team their Baja 500 ended prematurely at the 210-mile mark when the vehicle’s transmission broke. The experience is something the French driver is keen to learn from and an improved Baja performance is surely just around the corner.

“It’s not nice for the race to finish early for us because everything was going so well and we were having such a good time over here.” – Cyril Despres