It has been a challenging first half of the 2019 South African National Cross Country Series (SACCS) and after four tough rounds, the standings in the Production Vehicle Championship cannot be any closer. With only two rounds to go, anything can still happen and neither the leaders, the podium sitters or the rest of the field can be too complacent in their positions. 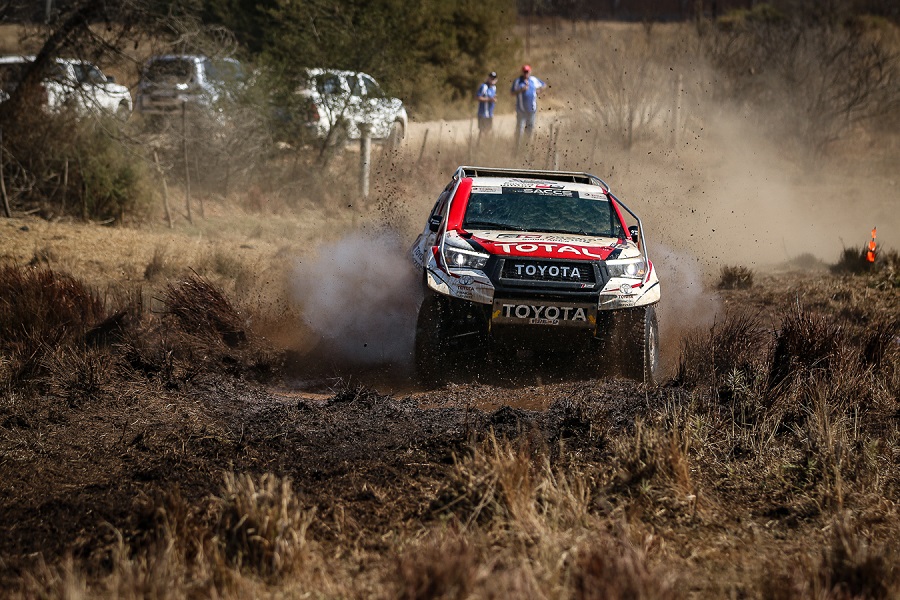 There has been some movement in the overall standings as well as in two of the three class championships – the FIA Class and Class T – and after the recent Bronkhorstspruit 400 everyone will feel the pressure to keep or better their positions during the final two events.

A podium finish for Variawa/Möhr combined with a mishap and yet another battle in the dust resulted in their team-mates, Giniel de Villiers/Dennis Murphy (70 points) losing their podium position and dropping to fourth overall. The defending champions are, however, only two points behind their team-mates and can add to the pressure during the rest of the season. 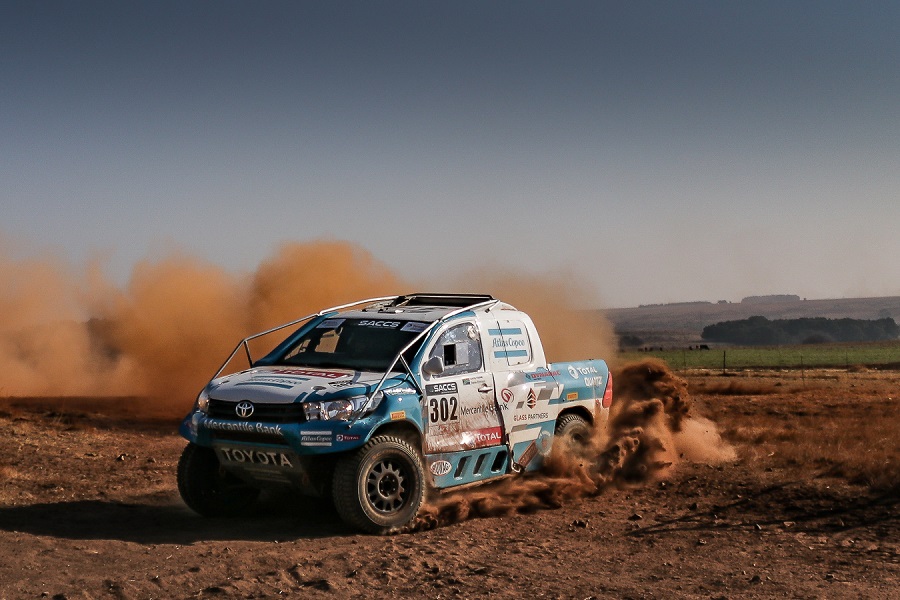 Chris Visser (Atlas Copco Toyota Hilux) had to make use of a new navigator after Philip Herselman relocated to Singapore just after winning the Toyota 1000 Desert Race in June. Visser teamed up with Danie Stassen and finished second at Bronkhorstspruit and although it was Stassen’s first points of the season, the healthy haul of points pushed Visser (67 points) from sixth to fifth in the overall Drivers’ Championship. He now trails De Villiers by a mere three points. With only five points the difference between Variawa, De Villiers and Visser and a battle royale can be expected.

Gareth Woolridge/Boyd Dreyer (Ford Castrol Cross Country Team) competed in two events in Class T and Woolridge (48 points) is now sixth in the Drivers’ Championship while Dreyer is fifth in the navigator standings, 22 points behind Murphy. The rest of the top 10 in the overall Drivers’ Championship consists of Johan Horn (Malalane Toyota) who has 42 points and is seventh overall; Jacques van Tonder (Ford Ranger) on 34 points and eighth overall; Ernest Roberts (Red-Lined Motorsport Nissan Navara) with 32 points is only two points behind Van Tonder and the Class S leader, David Huddy (Nissan Navara) who has 29 points.

In the overall Navigators’ Championship Werner Horn (Malalane Toyota) is seventh with 42 points. He can move up easily as two points separate him from Herselman who will not be scoring again. Van Tonder’s navigator, Sammy Redelinghuys (34 points) is eighth with Huddy’s navigator, Gerhard Schutte (29 points) ninth and Mike Lawrenson, who reads the notes for Johan van Staden (Elf Renault Duster) 10th, only two points behind Schutte. His driver (Van Staden) is 12th in the Drivers’ Championship.

The battles for the titles in the class championships will also continue until the end. In the FIA Class, Lategan/Cummings (146 points) lead their team-mates, De Villiers/Murphy (113 points) by 33 points meaning the leaders cannot afford to put a wheel wrong during the final two races. Variawa/Möhr (109 points) rounds off the all Toyota Gazoo Racing SA podium in the FIA Class and while they trail their team-mates by only four points, Variawa is only three points ahead of Visser who is on a mission and climbing the points ladder. 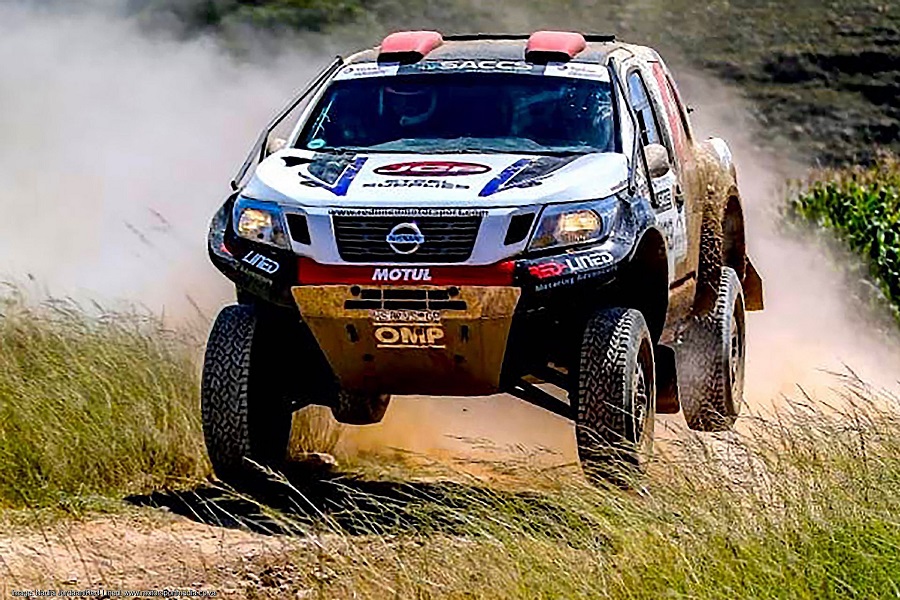 Roberts (Red-Lined Motorsport Nissan) rounds off the top five in the FIA Class Drivers’ Championship. He has 85 points. Schalk Burger (Schalk Burger Motorsport King Price Extreme) who has been on a steep learning curve in his first season of the Production Vehicle championship occupies seventh spot (63 points) and only one point ahead of Van Staden.

In the FIA Class Navigators’ Championship, Herselman (79 points) is currently fourth, but Riaan Greyling, who usually sits next to Roberts, but missed the last event, can close the gap of eight points. Only three points separate Greyling from Elvene Vonk (63 points) who reads the notes for Burger and Lawrenson (62 points) from one another but the current order can easily look very different after the next event.

In the Class T championship, defending champions, Woolridge/Huxtable can almost smell another title coming their way. They have a comfortable lead of 66 points over the Horn brothers in second place. Van Tonder/Redelinghuys (100 points) will be pushing the Malalane pair as only nine points separate them. Gareth Woolridge/Dreyer (84 points) are fourth with Gary Bertholdt/Geoff Minnitt (Atlas Copco Toyota Hilux) rounding off the top five, 17 points behind the Ford team.

In the Class T Drivers’ Championship Wors Prinsloo (Ford Ranger) has done well and is sixth (55 points) with Theuns Joubert (Elf Renault Duster) seventh (36 points), only one point ahead of Richard Leeke (ATS Ford Ranger) who is again only three points ahead of Dylan Venter (4×4 Mega World ARB Toyota Hilux) in ninth. Bernard Johnson (Toyota Hilux) started and finished his first national at Bronkhorstspruit and rounds off the top 10 in the Class T drivers’ standings.

The next three positions in the Class T navigators challenge belong to Kenneth Venter (40 points) with two events, the Berg 400 and the TDR 1000 under his belt,  Donavan Lubbe (32 points) and Henry Köhne (31 points) with the latter two earning their positions after only participating at TDR 1000 in Botswana in June. Simon Vacy-Lyle, who competed for the first time in the SACCS reading the notes for Leeke at Bronkhorstspruit, walked away with 20 points and sits in ninth place. André Vermeulen made a come-back to the SACCS and read the notes for Wors Prinsloo at Bronkhorstspruit scoring 15 points and rounds off the top 10 of the Class T navigators. 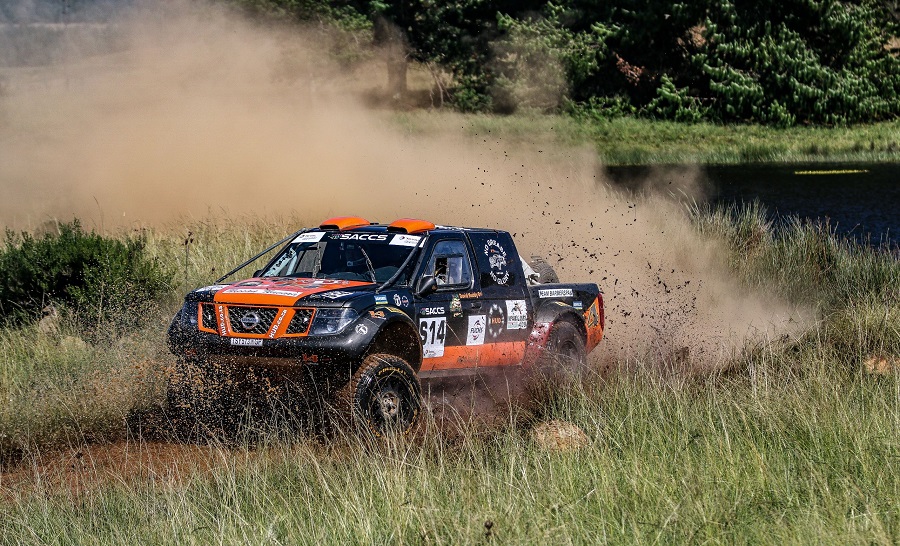 Huddy/Schutte have defended their Class S title successfully and are home safe. They will, however, push for a clean record and will welcome competition. Jannie and his son, Pieter Visser are second (30 points) while Archie Rutherford and his son, Kent scored points for starting the Bronkhorstspruit event although could not see out the distance.

The fifth and penultimate round of the SACCS, the Harrismith 400 takes place on 13 and 14 September and competitors will have another chance to add points to their scoresheet in their aim for titles and the final standings for the 2019 season.