What’s it like being the son, or even just a relative, of a world champion? It opens a few doors but, at the same time, it creates a weight of expectation that can easily become a burden. But nobody has told Oliver Solberg that. The 18-year-old son of 2003 World Rally Champion Petter Solberg made another bit of history recently when he became the youngest driver to take back-to-back victories on the same FIA European Rally 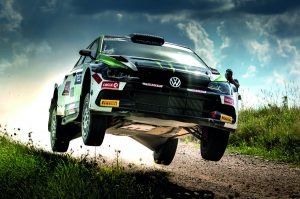 Last year, he became the youngest driver ever to win a European Championship event, taking victory on Rally Liepaja in Latvia aged only 17. This year, he did it again.

Of course, there are other young drivers with a strong family heritage in rallying, but no other bright prospects who are the sons of bona fide world champions. The ‘son of’ who is closest to achieving a world title is Kalle Rovanperä, whose dad is former WRC factory driver Harri Rovanperä. Despite this being only Kalle’s first year in a World Rally Car, he’s driving for Toyota like he has been doing it for decades. It’s not impossible that he could even win it this year.

But there’s one name that’s even more famous than Solberg in rallying, which is definitely one to watch. And that’s 16-year-old Max McRae, son of Alister and nephew of Colin. He has already built himself a reputation in circuit racing by winning the Arise Racing Driver search in his native Australia (where Alister has lived for many years) and then going from the back of the grid to fourth in his first Formula 1000 race. That championship has been postponed now, due to the pandemic, so McRae will take up his prize drive next year. But his ambitions understandably lie in rallying, and he has already tried Colin’s classic Ford Focus WRC for fun.

A famous name in itself isn’t enough to guarantee success, as Vesa Mikkola, Anton Alén and Max Vatanen have proved: all of them were good but never quite progressed beyond a certain level. But there are other big names who might just go a bit further…