Skip to content
Ott Tanak and co-driver Martin Jarveoja have escaped unharmed from a huge crash during Friday’s second stage of the Rallye Monte Carlo.

The reigning World Rally champion ran out of road almost halfway through the 12.8-mile Saint-Clement-sur-Durance – Freissinieres SS4 test, rolling his Hyundai i20 Couple numerous times before coming to a rest on a road lower down the mountainside. 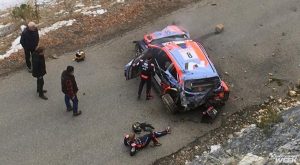 Both Tanak and Jarveoja were able to exit the car unaided and looked to be unharmed, but were later transferred to a local hospital for medical checks, as is standard procedure following a crash of this nature.

The Estonian, who switched from Toyota to Hyundai this season, was in fourth-place prior to the crash, 10.3 seconds adrift of event leader and Hyundai team-mate Thierry Neuville.

Following the conclusion of SS4, Neuville has dropped to second with Toyota’s Elfyn Evans taking over the top spot with a 3.4s advantage.