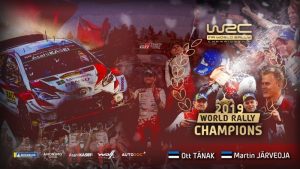 With one more rally to go, Ott Tänak has secured the 2019 World Rally Championship in Spain with the Australian Rally still to come.

It was a brave effort from Neuville who truly had only an outside chance to pocket the championship. He started off 44 points behind Ott Tänak but when Tänak finished in second place behind him, and at the same time claimed Power Stage bonus points – all his trouble came to naught.

More about this rally tomorrow early when we do a summary of all that happened.