Sunday, February 26: Overdrive Racing’s Aron Domzala made the perfect start to his challenge for honours in this year’s FIA World Cup for Cross-Country Rallies by claiming outright victory in the Baja Russia Northern Forest Rally, round one of the series across the icy wastelands of Karelia, north-western Russia. 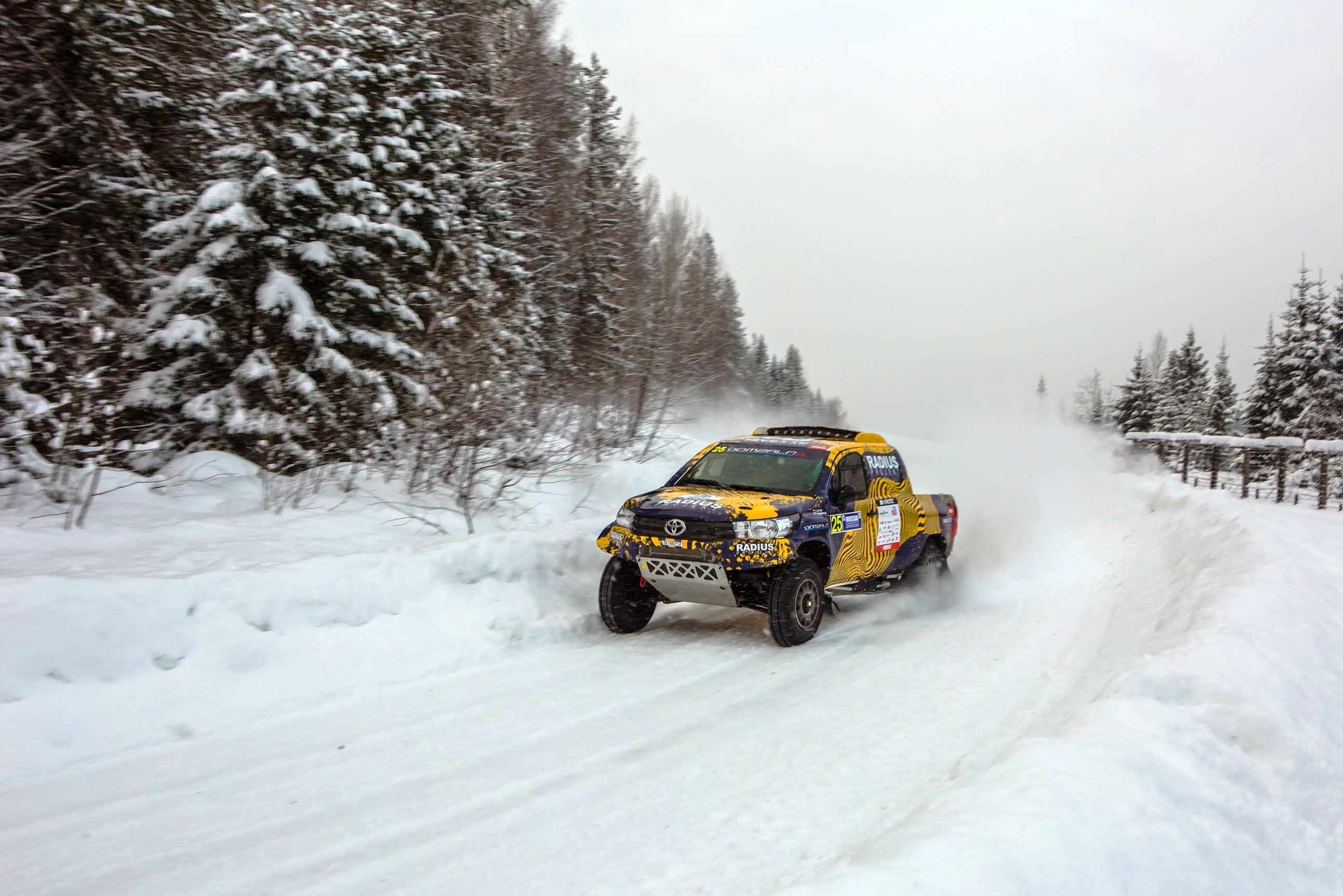 Domzala and his fellow Polish navigator Szymon Gospodarczyk survived a dramatic final day of action on the treacherous special stages, which saw overnight leader and former FIA World Cup winner Vladimir Vasilyev crash out of contention 100km from the finish line and fellow Russian Andrey Novikov excluded from the provisional results for running a car that exceeded the wheel suspension travel permitted in the FIA regulations.
Both incidents benefited the Polish duo in their Overdrive Racing Toyota Hilux and Domzala eventually finished 5min 24sec ahead of the Czech driver Miroslav Zapletal, despite clouting a rock and sustaining two flat tyres on the final stage.
“What a great result for us,” said Domzala. “The stage today was very nice and we had a super pace for 100km. It was really perfect. We caught Vladimir Vasilyev and he was 20 metres in front of us and we drove like that for two kilometres. Then, we hit a rock in the middle of the road and we got two punctures. So, we stopped, changed two wheels and started going again. We saw he had a roll, we stopped with him and tried to help and, after a couple of kilometres, we caught Andrey Novikov. Unfortunately, we could not get passed and had to run 20 centimetres behind his back for five kilometres. We had to stop for a minute or two as well because of the snow dust, but the result went our way in the end.”
“This result is a fantastic start to the FIA World Cup for Aron Domzala and Overdrive Racing,” said a delighted Jean-Marc Fortin, CEO of Overdrive Racing. “This is not an easy event at all and extreme weather conditions are always a factor, but it’s a perfect way for our team to get the new season of FIA World Cup events off the ground.”
Domzala had won the opening Prologue stage on Friday night in a time of 4min 12sec and been in contention for the win from the start of the selective section action on Saturday morning, despite fierce local competition.
Overdrive Racing now switches its attentions to three back-to-back rounds of the series in the Middle East, starting with the new Dubai International Baja, in mid-March.
2017 Baja Russia Northern Forest Rally – final results
1. Aron Domzala (ESP)/Szymon Gospodarczyk (POL) Toyota Hilux Overdrive 4hr 33min 14sec
2. Miroslav Zapletal (CZE)/Marek Sykora (SVK) H3 Evo VII 4hr 38min 38sec
3. Viktor Khoroshavtsev (RUS)/Anton Nikolaev (RUS) BMW X3 4hr 44min 49sec
4. Vladimir Frolov (RUS)/Alexsey Shaposhnikov (RUS) Nissan Pick-Up 5hr 07min 11sec
5. Vladimir Vasilyev (RUS)/Konstantin Zhiltsov (RUS) BMW X3 5hr 25min 50sec
6. Alexsey Titov (RUS)/Andrey Rusov (RUS) Ford F150 5hr 50min 05sec
7. Yasir Saeidan (SAU)/Laurent Lichtleuchter (FRA) Toyota LC200 6hr 33min 53sec
8. Shamyrat Gurbanov (TKM)/Gurbunberdi Danatarov (TKM) Nissan Patrol 7hr 35min 22sec