The 36-year-old won the opening stage and was never dethroned from the top of the leaderboard thereafter to record a 19.8 second winning margin over McKenna’s Škoda Fabia Rally2. Pastrana’s team-mate Brandon Semenuk was third, a further 1m18s down the road from McKenna. 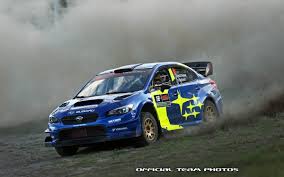 Victory was paramount for Pastrana this weekend after missing the Sno* Drift event in January and retiring from the Southern Ohio Forest Rally when his Subaru burned to the ground on the second stage.

He therefore had a new chassis for Ojibwe and a new co-driver in the shape of Rhianon Gelsomino as usual navigator Robbie Durant was still unable to fly from the UK to the US because of COVID-19.

Pastrana admitted the new car felt “awesome”, and he proved it with a stage one time that was 22.9s faster than next-best driver McKenna. He also won the next test, only for McKenna to get the hammer down and start taking time back.

Points leader McKenna found himself in the precarious position of having to think about the title, despite it only being round three of six. But the Irishman wasn’t driving like he did, opting to chase after Pastrana’s lead instead of conserving his pace and position with his main title rival Semenuk behind him.

He consequently recorded four stage wins in a row on Friday to apply serious pressure to Pastrana, but once Saturday’s action got underway, it was clear Pastrana had an answer to every McKenna attack.

Quickest on Saturday’s three morning tests, Pastrana doubled his advantage to head McKenna by 39.6s with five stages of the rally remaining. From there, there was no need to push and surviving an SS12 puncture, the 2017 ARA National Champion went into consolidation mode to record his first rally victory – and co-driver Gelsomino’s first ever in America – since he won that 2017 title on this very event.

For McKenna, second place might upset the fighter in him and he put in a spirited charge on Saturday’s final loop – taking 23s back from Pastrana – but placing ahead of Semenuk further strengthens his bid to win the 2020 ARA National crown.

Semenuk’s third place was a strong result for him too, as he took his second podium in as many rallies and a stage win on SS11 Sugar Bush 2 to boot.

He had been in a close battle with Ryan Booth’s Ford Fiesta R5 after Friday but began to pull away on Saturday’s stages as Booth found himself in no man’s land between Semenuk ahead and the returning Piotr Fetela behind. Booth was another to impress as he started to get the hang of R5 power in just his second season of rallying and fifth event in the car.

Fetela meanwhile hadn’t been out since the Sno* Drift in his Ford Fiesta Proto, and found himself locking horns with the Subaru-driving Jeff Seehorn throughout the rally. Ultimately Fetela had the edge in this battle, beating Seehorn to fifth spot by over two minutes at the finish.

John Coyne was a credible seventh in his Ford Fiesta R5, seeing off the challenge of Seamus Burke’s 1977 Ford Escort who picked up eighth and the two-wheel-drive honors.

Chris Greenhouse’s Dodge Neon SRT4 was Burke’s closest challenger at some points, but found himself in 10th place come the end of the rally, behind Robert Sanders’ Subaru Impreza.

Heading into the final loop a slender 8.8s behind Limited 4WD class winner Sanders after issues on Saturday’s second loop, Greenhouse put pedal to the medal on the final two stages but could only take 0.4s out of Sanders’ advantage.

Hovinga overhauled his rival on Saturday’s second test – Height o’Land 1 – despite losing ground on Strawberry Mountain 1, only to lose the lead again after Sugar Bush 1.

This intensity continued into Saturday’s second loop with Hovinga retaking the lead immediately after service, but Gingras seized control in the final two stages to end up 1m48.6s clear and 11th place overall on the rally.