Stephane Peterhansel took his second stage win of the Dakar Rally on Friday, completing the desert run from Ha’il to the Saudi capital of Riyadh 1m35s ahead of JCW X-Raid Mini teammate Carlos Sainz. The Spaniard retains a solid lead in the overall standings, however, 7m48s ahead of Toyota driver Nasser Al-Attiyah, who finished third today, and 16 minutes up on Peterhansel at the halfway point of the marathon event. 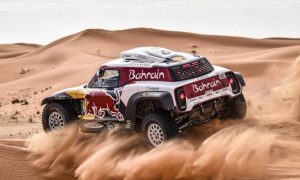 “Today was a long stage — 477 km (296 miles), said 13-time Dakar winner Peterhansel. “It was fast but sometimes we crossed some dunes, so it was slow, fast, slow, fast… But the biggest problem for me is that with these high speeds you need to really concentrate a lot. You are not physically tired but it’s more mentally tiring. When we are at really high speed we need to be really focused.”Although reigning champion Al-Attiyah continues to split the two Mini drivers at the top of the standings, the Toyota Hilux driver admitted he is struggling to match their pace.

“I am disappointed because we are really going at the maximum and the Mini buggy is too fast compared to a 4×4,” he said. “But what can we do? This is a new Dakar and I think we need to do a really good job. We’ve finished the first week without any problems and I’m quite happy. We’ll see next week. It will be tougher. I think there will be more dunes — but it’s still a long way.”

Behind the three leaders of the car category, Yazeed al Rajhi and Dakar rookie Fernando Alonso both put in good performances on Stage 6. The Saudi driver reinforced his fourth place overall by finishing there on the stage, while Alonso trailed Mathieu Serradori home in sixth place today, and is ranked 16th overall at the halfway point.

In the bikes, Kevin Benavides’ hopes of victory appear to have evaporated after the Argentine suffered a broken engine on his KTM and required a tow to the finish, dropping him to 27th overall, while Australia’s Toby Price also had a troubled stage, finishing 11th and dropping to third overall. 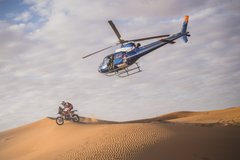