The results of a gruelling Toyota 1000 Desert Race (TDR 1000), the only marathon event on the South African National Cross Country Series (SACCS) calendar, that took place in Botswana recently had a significant effect on the Production Vehicle Championship.  The shuffle in the standings at the halfway mark of the series, predicts an interesting latter half of the season. 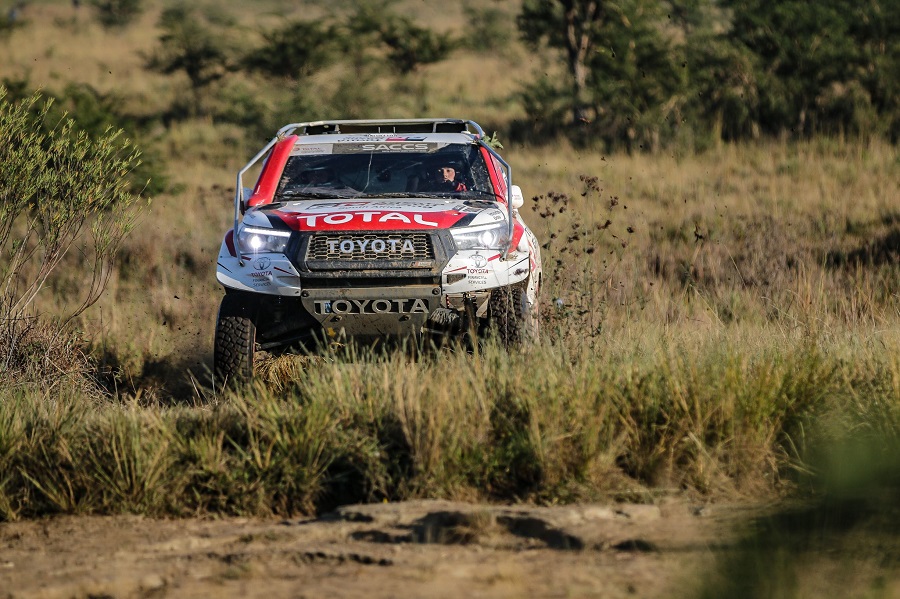 Henk Lategan
After three days of racing, blinding dust, gnarly rocks and an extremely tight route, successful teams were rewarded with double points and those who experienced problems along the way and lost valuable points, will have their work cut out for them during the final three events of the season. The competition in the overall championship as well as the battles for the championship titles in the FIA Class and Class T, are now even more compelling, and no one is safe yet.

The Toyota Gazoo Racing SA team-mates, Henk Lategan/Brett Cummings and Giniel de Villiers/Dennis Murphy were tied on points before they took on the TDR 1000. Things, however, went south for both teams and De Villiers/Murphy were forced to race mid field on the last day after damage to their Toyota Hilux on Saturday, and had to settle for lesser points.

Lategan/Cummings, who won the first heat, but finished last on Sunday after a dreadful day in the office, managed to keep the lead in the overall standings while De Villiers/Murphy dropped back to the third place, now trailing their team-mates by 20 points. Sandwiched between the two Toyota Hilux crews, are Lance Woolridge/Ward Huxtable (Ford Castrol Cross Country Team) who posted the fastest time after the second heat on Sunday and claiming maximum points. The Ford Ranger pair are only eight points behind Lategan/Cummings and 12 points ahead of De Villiers/Murphy.

A good outing in Botswana resulted in Shameer Variawa/Juan Möhr (Toyota Gazoo Racing SA) moving up one position into fourth place overall and trail De Villiers/Murphy by nine points. After not competing at the Berg 400, but with good results at the season opener as well as at the TDR 1000, Gareth Woolridge/Boyd Dreyer (Ford Castrol Cross Country Team) jumped to fifth place overall, now trailing Variawa/Möhr by a slender six points.

Excellent results in Botswana saw a turn-around in the title battle for Chris Visser/Philip Herselman (Atlas Copco Toyota Hilux) who had a dismal start to the 2019 season. They moved from 15th spot on the overall standings to sixth and are only four points behind Woolridge/Dreyer. The Horn brothers, Johan and Werner (Malalane Toyota) dropped to seventh place overall after a disappointing sixth place in Heat One and third in Heat Two of the TDR 1000. They trail Visser/Herselman by 12 points in the overall standings.

The desert race did a good job of scrambling the standings in the championships and the battles for the titles will be taken to the next level at the Bronkhorstspruit 400 in August. In the FIA Class, Toyota Gazoo Racing SA adorn the podium, but the title chase is still wide open. Lategan/Cummings are in the lead with De Villiers/Murphy second trailing them by 15 points. Variawa/Möhr are on thin ice as they trail De Villiers/Murphy by 10 points but are only eight points ahead of Visser/Herselman.

Van Dyk is nine points behind Visser in the FIA Class drivers’ standings with newcomer Ernest Roberts (Red-Lined Motorsport Nissan), who made a good start to the season, but could only finish the first heat in Botswana, four points behind Van Dyk and seven points ahead of Schalk Burger (King Price Nissan Navara). Van Staden, Terence Marsh (Red-Lined Motorsport Nissan) who did not compete in Botswana and Jason Venter (4×4 Mega World ARB Toyota) who only scored once in Botswana and not participating in the first two events of the year, round off the top 10 in the FIA Class drivers’ championship.

In the FIA Class navigators’ championship, Greyling will more than likely overtake Herselman as the latter is relocating to Singapore and will not compete in the SACCS for the remainder of the season. Greyling is eight points behind Herselman and seven points ahead of Elvéne Vonk who reads the notes for Burger. She is five points ahead of Mike Lawrenson (Elf Renault Duster) followed by Jaco van Aardt who sat next to Venter during their only outing so far this season in Botswana.

In Class T, four victories on the trot have put Woolridge/Huxtable in quite a comfortable position as they lead the Horn brothers by 54 points. While it seems that Woolridge/Huxtable are on their way to successfully defend their Class T championship title, a real battle is brewing behind them as the Horns are only two points ahead of Gareth Woolridge/Dreyer who are a mere one point ahead of Van Tonder/ Redelinghuys.

With only three points separating the teams in the second, third and fourth places, another shuffle is highly possible and white-knuckled racing is on the cards.

Wors Prinsloo/Kenneth Venter (Ford Ranger) are somewhat further down in fifth place with Gary Bertholdt/Geoff Minnitt (Atlas Copco SA Toyota Hilux) dropping to sixth place after not being able to earn decent points in Botswana due to Bertholdt being violently ill.

It has been quite a lonely battle for Huddy/Schutte in Class S and their consistency sees them with a healthy lead over Jannie Visser and his son, Pieter (Toyota Hilux) who only competed in Botswana.

The battle for the 2019 SACCS titles will continue on 2 and 3 August when teams tackle the Bronkhorstspruit 400.