Skip to content
A new rally in Estonia will take place on July 24-25, supported by DirtFish, and will feature defending FIA World Rally Champion Ott Tänak.

After initial details of the rally were revealed last week, the new event, which is the first major rally planned since the COVID-19 pandemic in March, has been named Rally DirtFish and will be based in Otepää in the south of the country. 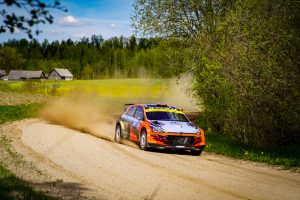 The organisers are ensuring they’ll comply with all the rules and regulations regarding the coronavirus crisis and are hoping that the event will give something for the fans to enjoy in what continues to be a troubling time around the world.

DirtFish owner Steve Rimmer said on the news of the partnership: “Coronavirus has affected – and continues to affect – so many people all around the world.”

“When we first talked about getting involved in this event, we had to be absolutely sure the focus was on COVID awareness and keeping everyone safe; we know the Estonian Autosport Union can run rallies, but dealing with the virus is something new to us all.”

The one-off event is scheduled only a fortnight before the planned restart of the WRC in Finland and Rimmer continued: “Every aspect of the sporting procedure has been closely inspected, questioned, debated and modified to work in the evolving society that we all live in now. But as well as that, Rally DirtFish is about putting smiles back on the faces of rallying fans.”

“Naturally, the number of live spectators is going to be limited, but the wider world of rallying shouldn’t worry, we have plans to bring racing to the rest of the world. These plans will be announced in the coming weeks.”

“This is an opportunity for DirtFish to get involved with an event putting itself at the forefront of the sport’s way forward in the post-coronavirus era. The level of planning and attention to detail from the event organizers is all-encompassing.”

Defending WRC champion Tänak, who has been in his native country during the lockdown period, said on the news of a new home event: “The last few months have been incredibly strange, all around the world we saw such big changes in the way we do everything. It’s been something new to sit at home for that long time, a great chance to really get to know my family – but now it’s time to plan the way back to work.”

“For the WRC, we wait to find out where we will go next, but to have this opportunity to make a rally in Estonia is great and very important at the same time. We have amazing support for the sport here and, of course, I will help however I can with Rally DirtFish.”

The Estonian also revealed although he’s planning to enter the event himself, he’s still unsure what yet he’ll actually be driving and added: “One thing is sure: I will definitely be there. And, hopefully, I can find something interesting to drive.”

The DirtFish Rally is set to take place on July 24-25 with a backup date of August 7-8.