OTT TÄNAK CAPITALISED ON A PROBLEM FOR TEAM-MATE JARI-MATTI LATVALA TO INCREASE HIS LEAD OF RALLYRACC CATALUNYA – RALLY DE ESPAÑA AT THE MIDPOINT OF FRIDAY’S OPENING LEG.The Estonian finished second in the difficult La Fatarella – Vilalba speed test, a tenth slower to prove decisive than a rejuvenated Andreas Mikkelsen, to head Elfyn Evans by 11.7sec as competitors returned to Salou for service. 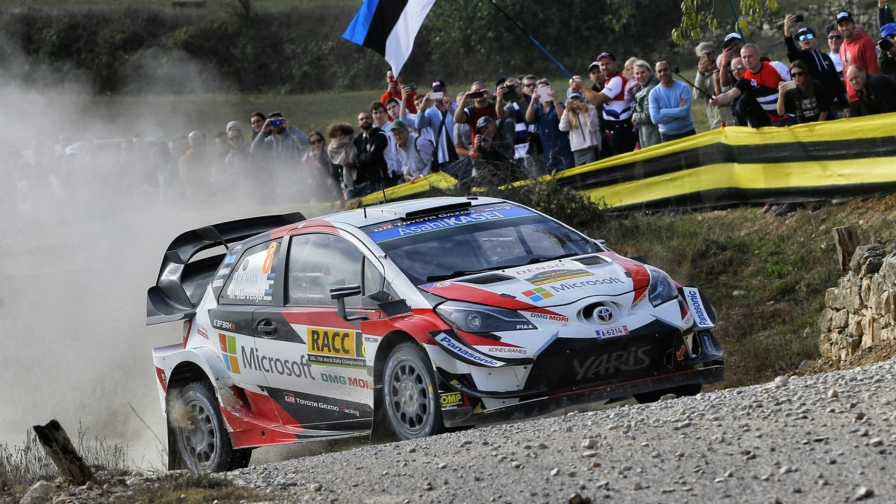 “It’s been a good run. This one was such like a track, not a road. It was extremely slippery in places. I was quite steady but it was a clean run,”said Tänak, who never finished outside the top two times in the three morning stages.

There was heartbreak and anger for Toyota Yaris team-mate Latvala. He was more than 10sec quicker than anyone else at the mid-stage split times, and on course to take the lead, before a rear left puncture cost 50sec.

“I don’t want to know, I’m so angry now. I would have won this rally now if I had not had this,” said the frustrated Finn, who ended the test on the wheel rim and down to 10th.

A cautious, but clean, approach paid dividends for Evans who climbed to second after Latvala’s struggles. The Ford Fiesta pilot was 7.5sec clear over home hero Dani Sordo, who complained of little grip at the rear of his Hyundai i20.

Lack of traction was a common concern on the loose gravel. While those using Michelin’s medium rubber may have enjoyed a slight benefit over those on the harder compound, road cleaning offered a clear advantage to those starting further down the order.

Mikkelsen’s stage win vaulted the i20 driver from eighth to fourth. The Norwegian made changes to the rear of his car before the stage and he felt more comfortable with its handling. He was 4.0sec behind Sordo and at the head of a trio covered by less than 5sec.

Sébastien Ogier was next up in a Fiesta, 3.1sec ahead of fellow countryman Sébastien Loeb, who jumped from ninth to sixth in his Citroën C3 with third fastest time.

A wild spin dropped Craig Breen from fifth to seventh. His Citroën C3 rotated and stalled in a compression and the Irishman had to drive back down the road to turn round. He lost 15sec.

Championship leader Thierry Neuville was almost 40sec off title rival Tänak’s pace in eighth, still less than 20sec from a podium position. The Belgian lost a handful of seconds with an overshoot. Lappi and Latvala completed the leaderboard.