JARI-MATTI LATVALA LED A CLOSELY-FOUGHT RALLY ITALIA SARDEGNA AFTER A HOT AND DUSTY QUARTET OF SPEED TESTS ON FRIDAY MORNING WHICH ENDED IN RETIREMENT FOR WRC LEADER SÉBASTIEN OGIER.Latvala headed Toyota Yaris team-mate Ott Tänak by 2.8sec, but the morning ended in disappointment for Ogier who parked his Citroën C3 1km from the start of the closing Monte Baranta test with broken suspension.

The Frenchman trailed Latvala by almost 30sec in ninth after struggling for grip on sandy gravel tracks. That became irrelevant when he cut a left bend too tightly, hitting a roadside rock (pictured) which pitched the car onto two wheels and shattered the suspension. 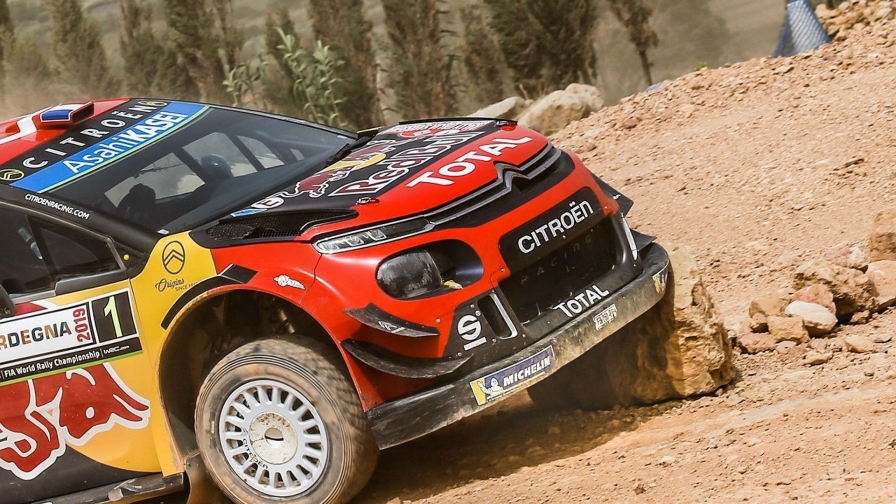 Less than six seconds blanketed the top four drivers. While Latvala didn’t win a stage, his consistency enabled him to demote Teemu Suninen from top spot despite almost rolling and later stalling his engine in a hairpin.

“I knew it was going to be a hard morning. I took five hard tyres and it was the correct choice. It’s tricky when you have a road position that allows you to push. You can wear the tyres, so you have to find a balance between pushing and saving them,” said Latvala.

Tänak’s second place was a surprise, given the Estonian was second in the start order. The sandy surface meant the early runners cleaned the roads, creating better grip for those further back.

He had 0.7sec in hand over Dani Sordo’s Hyundai i20, the Spaniard coping without a spare tyre after using it to replace a first stage puncture. Elfyn Evans was another 2.4sec back, despite handling issues that prompted him to lock his Ford Fiesta’s differentials.

Team-mate Suninen slipped to fifth after a spin in Tergu-Osilo knocked his confidence, while Thierry Neuville rounded off the top six in another i20. The Belgian was the only driver to choose Michelin’s medium compound tyres all round and it was a decision he regretted.

“It probably wasn’t the best choice. We carried more extra weight and in these narrow stages with stones outside, the car was dancing and you can’t keep it straight,” he explained.

Team-mate Andreas Mikkelsen was seventh ahead of Kris Meeke, who lacked experience of the stages but was less than 20sec off the lead.

Esapekka Lappi dropped down the order in Tergu-Osilo with a rear puncture on his C3 but recovered to win Monte Baranta. The Finn was ninth and headed fellow countryman Juho Hänninen, who completed the leaderboard.