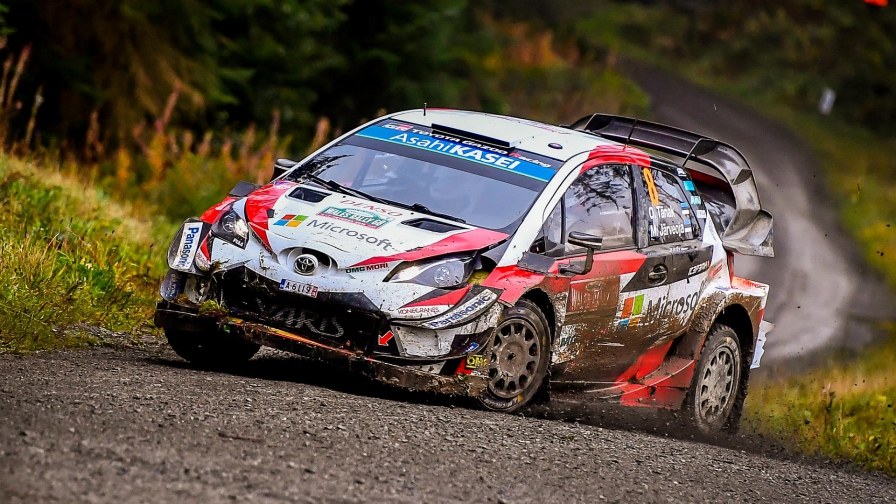 The Estonian driver comes into Wales Rally GB with three consecutive WRC event wins and is in prime position to maintain that run with a 28.8s lead on championship leader Thierry Neuville at the end of SS9.

While Tanak won the first two stages of the afternoon loop, Evans stopped midway through SS7 with a suspected engine issue which forced him out of the running from second place. Coupled with a timely charge and Evans’ exit, Neuville has moved up to second place for Hyundai and victory on SS9 saw him trim Tanak’s lead to 28.8s.

Fellow Toyota driver Jari-Matti Latvala holds third place just 2.5s off Neuville with teammate Esapekka Lappi recovering from an early spin to move up to fourth and just 4.6s off Latvala at the end of Friday’s running, with all three Toyotas inside the top four.

Sebastien Ogier also attempted a Friday afternoon push to see him move up to fifth on the overall classification for M-Sport Ford, just 2.3s off Lappi, with Citroen’s Craig Breen slotting into sixth place over 10 seconds off the defending WRC champion.

Hayden Paddon produced a solid final stage on Friday to jump to seventh place for Hyundai, coupled with M-Sport Ford losing Teemu Suninen who went off the road on SS9, which saw Mads Ostberg retain eighth place for Citroen.

Hyundai’s Andreas Mikkeslen has moved up to ninth place by virtue of Suninen’s drop down the order with WRC2 class leader Kalle Rovanpera rounding out the top ten for Skoda, with almost a full minute lead on Pontus Tidemand.

Top 15 classification after SS9 from Wales Rally GB, the eleventh round of the 2018 World Rally Championship.