Skip to content
Double RX2 International Series champion Cyril Raymond will debut the brand-new all-electric Citroën C3 ERX next weekend in the second round of the Projekt E support series at the World RX of Latvia in Riga.

Raymond was a regular driver in last year’s FIA World Rallycross Championship as he drove for the GCK Academy team but has been without a seat for this season and will instead focus on giving the C3 ERX its debut at Riga. 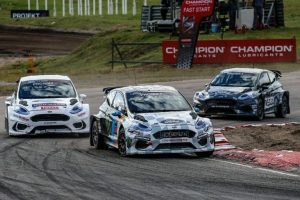 The C3 ERX is the first all-electric car based on a R5 / Rally2 chassis from rallying and is developed by STARD with support from Citroën Racing. The car is the second in the series alongside the Ford Fiesta ERX which also has factory support from Ford Performance.

“I’m delighted to join the Projekt E grid, especially at the wheel of a French car.” said Raymond.

“I’ve made my reputation in single-specification categories, being double RX2 Champion, and I really believe that the Projekt E format suits my style completely. I’m convinced that electric rallycross will not only provide me with the opportunities I need to carry on in this sport, but will allow drivers to make a career out of racing in this discipline, which is perfectly suited to demonstrating the incredible capabilities of electric technology.”

The series made its debut at the World RX season opener in Sweden where American rallycross and YouTube star Ken Block wrote history by winning the first ever electric only rallycross event.

Similar to the Fiesta, the C3 ERX will use three electric motors producing 450kW (613hp) and 1002nM of instantaneous torque. The cars can reach a top speed of 240km/h and use a two-speed transmission on both of the axles with four-wheel-drive.

“Citroen has an amazing history in global motorsport and it’s an honour to be able to give the new Citroen C3 ERX its first competitive outing. I’d like to thank STARD, Citroen Racing and Manfred Stohl for the trust they’re putting in me to drive the car, and I will put in maximum effort to do my best in Riga.” Raymond added.

The official entrants for the second round of Projekt E is still yet to be fully confirmed, although news of Raymond’s appearance is somewhat surprising after Norwegian FIA World Rally Championship driver Mads Østberg had planned to be competing in the series after missing out in Sweden due to a lack of spars parts being available.