Renault believes a problem with a fuel breather was the cause of Kevin Magnussen’s dramatic fire during first free practice for the Malaysian Grand Prix.Magnussen’s car burst into flames after an installation lap early in the Friday morning session, with the flames refusing to die down as fuel continued to pour from a pipe situated at the top of the engine cover. 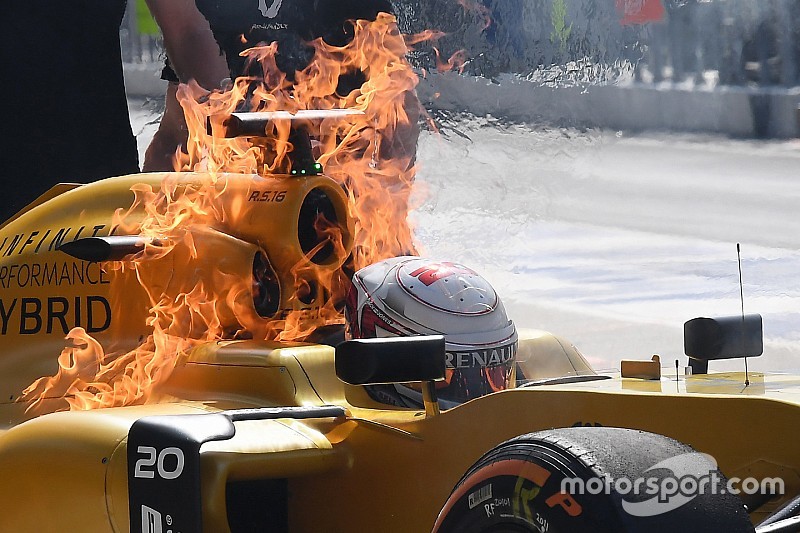 While investigations continue into the specific cause of the problem, team principal Fred Vasseur confirmed that it had been triggered by a fuel system issue.

“It was definitely something in the fuel system, but we are still investigating,” he told Motorsport.com

Technical director Nick Chester later told Sky that Renault had been running ‘experimental’ parts ahead of the Mexican Grand Prix.

“We had a fuel leak from a breather,” he said. “We were running the tank full and we were running some experimental parts really in preparation for Mexico, so it was a different setup to the other car.”

It could be that the problem was with a valve on a fuel breather pipe, which was allowing the fuel to escape when it is normally designed to vent air.

Mexico’s air pressure is much less than at Malaysia, so systems would need to be calibrated differently, which may have been a factor too.

Vasseur was confident that Magnussen’s car would be ready in time for him to be back in action for second free practice.

“There was some fire damage, but the biggest issue was the fire extinguisher,” he said. “But he should be okay.”