Skip to content
Audi Sport Team Rosberg driver René Rast had a profitable weekend at Misano, completing the third round of the season as the new championship leader after being the highest scoring driver in the field this weekend.

Despite the achievement however, Rast was disappointed to not win any of the races at the Italian circuit. 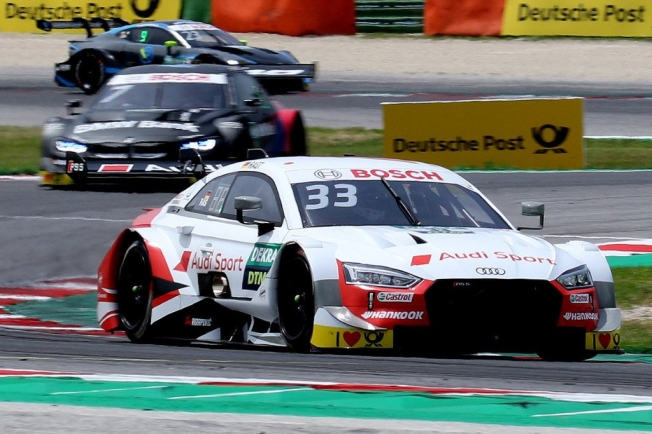 Audi and Rast appeared to be the strongest package across the weekend, where the abrasive tarmac and hot temperatures became key factors, with Rast taking both pole positions at stake.

But things wouldn’t work in his favour across the two races, with second place on Saturday being followed by third place on Sunday after a chaotic second race.

At the start, fellow Audi drivers Robin Frijns and Nico Müller got ahead of the 2017 champion, with Rast also coming under attack from WRT’s Jonathan Aberdein. He would then find himself in the middle of the South African and BMW’s Marco Wittmann in a three-way battle at Turn 8 that resulted in contact that put Wittmann out of the race with broken steering.

“I had a poor start and lost several positions,” said Rast after the race. “Then I had a contact at Turn 8 involving Marco and Jonathan, I couldn’t really do much, I was in a sandwich. I got hit by Jonathan and then I hit Marco. I think he couldn’t continue in the race, and I’m sorry for that, but there was nothing I could do.”

Rast worked his way to the lead of the race, but a puncture on lap 14 forced the Team Rosberg driver to limp back to the pits.

“I was back to the lead but unfortunately had a puncture, so came to the pits and had new tyres,” added Rast.

Rast was then in second place behind Müller, but BMW’s Philipp Eng was determined to fight for the best honours, attacking Rast and overtaking for second place on lap 21, with Rast powerless to fight back.

“There wasn’t much I could do with the traffic and finished third, which is good for the championship, but basically it wasn’t the best race,” concluded Rast.

Despite the disappointment for not winning, Rast now leads the championship with 93 points, 10 over Eng and 17 ahead of Müller, with Wittmann now 25 behind.

In the manufacturers’ championship, Audi extended their lead with 340 points, 77 ahead of BMW Motorsport. Aston Martin remains a distant third with only 15 points in their account.

“I think René struggled a little bit with the second set, we have to look if he had some damage in the car from the contact with Aberdein and Marco Wittmann, but I think overall it was a very good race for us,” said Audi Sport boss Dieter Gass.