Daniel Ricciardo battled engine issues and soaked up race-long pressure from Ferrari’s Sebastian Vettel to score a superb Monaco Grand Prix win ahead of the German and Mercedes’ Lewis Hamilton. 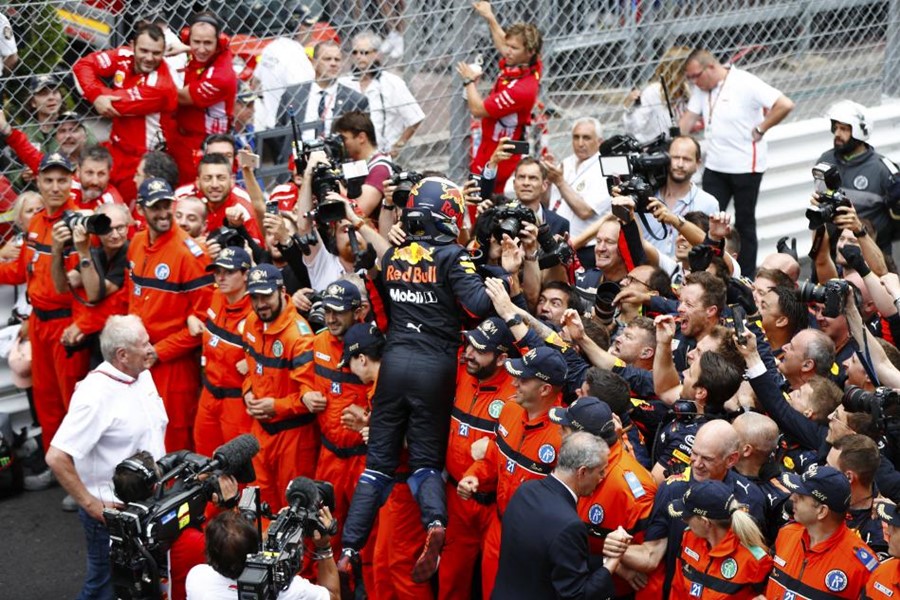 The Australian, who led away from pole position, developed a power issue and a possible gearbox problem with his car midway through the race and after being told by his team that the problem could not be rectified, he delivered a superb defensive drive, with just six of his car’s eight gears at his disposal, to claim his seventh career win and his first in Monaco.

The victory makes up for 2016 when the Red Bull driver lost out on victory in due a botched pit stop that dropped him to second place.

At the race start, Ricciardo made a clean getaway and despite a brief attack from Vettel he held his advantage to lead through Ste Devote ahead of the German and Hamilton. At the back of the grid Max Verstappen made a good start and swiftly cleared the Haas cars of Kevin Magnussen and Romain Grosjean to hold P18 at the end of the opening tour.

Verstappen then worked has way past Sauber’s Marcus Ericsson on lap three and began to close on Williams’ Lance Stroll. He made light work of passing the Canadian on lap seven, down the inside into the Nouvelle Chicance. The next move was past Toro Rosso’s Brendon Hartley and that came soon after, putting the Dutchman in P14 before the start of lap nine.

At the front Ricciardo eked out a 2.5s gap top Vettel but then on lap 11 Hamilton pitted for ultrasoft tyres, emerging in P6 behind Force India’s Esteban Ocon. The Mercedes driver passed the Frenchman soon after and then began to chase after the leaders, 28s behind Ricciardo.

Vettel was next in taking on ultrasofts and then, at the end of lap 17, Ricciardo pitted from the lead. He also took ultrasofts but as he rejoined in the lead, about four seconds ahead of Vettel, Valtteri Bottas pulled up at his pit box and went for supersofts.

Further back Verstappen was still making his through the field and after passing Leclerc, Harley and Sainz and others pitted, he found himself in P11 behind McLaren’s Fernando Alonso who had pitted for supersofts.

By the end of lap 25 Ricciardo had a 1.7s lead over Vettel, while Hamilton was now 8.6s off the lead. Raikkonen had closed to 1.2 behind Hamilton, with Bottas 6.0s behind his fellow Finn.

Vettel then began to close on the leader and by lap 30 he was just 0.7s behind Ricciardo. The leader reported a loss of power and as the situation unfolded the Australian asked his team whether the situation would improve. His race engineer’s response was a swift negative.

Ricciardo was now in a position where he would have to defend for more than 40 laps. Behind him Vettel looked to attack but as the Australian protected his lead the German’s tyres began to grain badly.

Behind the leading pair Hamilton began to increase his pace, sensing that the slow laps being put in by the front pair could signal an opportunity. Further back, Bottas began to close on fourth-placed Raikkonen.

The top end of the order now began to bunch up and on lap 45 the leading five cars were separated by just eight seconds.

Further back, Verstappen finally made his sole pit stop at the end of lap 48, taking on hypersofts for a late race push to the flag. He emeged in P11, ahead of Toro Rosso’s Brendon Hartley and 10 seconds behind Renault’s Carlos Sainz.

That promoted Verstappen to P10 behind the Hulkenberg who had dropped behind Sainz after his stop. When Sainz allowed his team-mate past, Verstappen closed on the Spaniard and after Sainz cut the chicane as they battled the Red Bull driver swept past in the Nouvelle Chicane to take P9.

Ahead, on lap 60, Vettel was still pushing, looking for a way to attack Ricciardo, but the Australian was controlling his defence with aplomb and the gap remained steady at around one second. Hamilton’s charge appeared to have ended as he fell 2.9s behind Vettel, while Raikkonen was a further 2.6 back in fourth place.

Verstappen, though, was till trying to make progress and with 13 laps remaining he had reeled in Hulkenberg, who in turn had caught up with Toro Rosso’s Pierre Gasly.

There was late drama when local hero Charles Leclerc crashed into the back of Hartley’s Toro Rosso, but with Leclerc sliding up the escape road and Hartley able to limp to the pits, it was only cause for the Virtual Safety Car to be deployed.

And as the caution came to an end, Vettel dropped right back, settling for second place, seven seconds behind the Australian. Hamilton, too, nursed his car to the finish, finishing almost 10 seconds behind Vettel.

Fourth place went to Raikkone, with Bottas fifth and Force India’s Esteban sixth. Gasly drove superbly to hold onto seventh ahead of Hulkenberg and Verstappen and the final point went to Sainz.