Skip to content
Valentino Rossi could return to World Rally Championship action following a 12-year hiatus after the series added the Monza Rally to its schedule for 2020.

The WRC has – like the rest of the motorsport world – had to piece together an impromptu 2020 calendar amid the coronavirus pandemic.

The spread-out nature of rallies has given the WRC bigger challenges than circuit racing counterparts that could arrange and police closed-doors events.

On Friday the championship announced that it had sealed a deal for a version of the traditional single-venue rally at Formula 1’s Italian Grand Prix track Monza to join its calendar as the season-closer in December.

Rossi made his first appearance on the Monza event in 1997, and has contested it regularly since then – winning on a record seven occasions using World Rally Car machinery.

But he’s also got experience of fully-fledged WRC rounds.

The Yamaha rider – currently 11th in the MotoGP standings – made his first WRC appearance in 2002 on Rally GB, where he crashed out on his first full forest stage in a Peugeot 206 WRC now famous in rally circles for its Michelin livery and links to Rossi.

He then finished 11th in the 2006 Rally New Zealand driving a Subaru Impreza, and made his last appearance in the series aboard a Ford Focus WRC on Rally GB in 2008, where he finished 12th.

The 41-year-old says Monza becoming the new WRC finale on December 4-6 has made it “a lot more interesting” to him in a year when he’d been thinking of skipping it.

“I know about Monza – a lot of people have already called me,” said Rossi after practice for MotoGP’s French Grand Prix at Le Mans today. 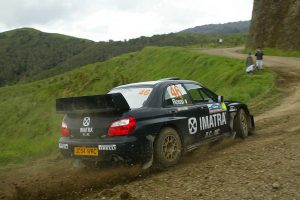 “The plan was to not race in Monza because I wanted to race in Abu Dhabi again like last year.

“But for sure the situation has changed and to make it the last round of the world championship makes it a lot more interesting, and I have to see what happens now.”

Rossi had to miss last year’s Monza Rally to compete in the Gulf 12 Hours. He won his class there driving a Ferrari 488 GT3.

However, the Gulf 12 Hours has moved dates this year to January 2021, which could avoid the clash between it and the Monza Rally should Rossi want to do both.

Typically, the Monza Rally – which has gained a cult following – uses the racetrack both clockwise and anti-clockwise, as well as the surrounding access roads at the famous venue and its legendary banking.

Part of that format will remain as it gets WRC status in 2020, with Friday and Sunday dedicated to the racetrack venue.

However, the Saturday will feature a new element as the cars will venture outside the circuit to take in closed public roads in the nearby Lombardi region. The total event distance will be 135 miles.

When news that Monza could join the WRC calendar first emerged, some fans criticised the prospect on the grounds that a single-venue enclosed event at a racetrack was felt to be inappropriate for the world championship.

Single-venue rallies often focus on short stages, but last year the Monza event featured a 27.9-mile stage – which would put it among the longest tests in this year’s WRC if used again.

The stages on closed-public roads on Saturday should also go some way to dispersing criticism of Monza’s WRC slot.

The WRC is currently competing in Sardinia. Dani Sordo – not in title contention – is leading by 17.4 seconds after the first of three days of action in Alghero.

The season has been shortened due to events lost because of the coronavirus pandemic, but should now comprise eight rounds. It had originally planned 14, losing its Chile event because of civil unrest in the country even before the pandemic hit.