Skip to content
Dakar 2018 was turned on its head on Saturday to bring a new look to the leaderboard as the race pulled into the Bolivian Andes town of Uyuni. 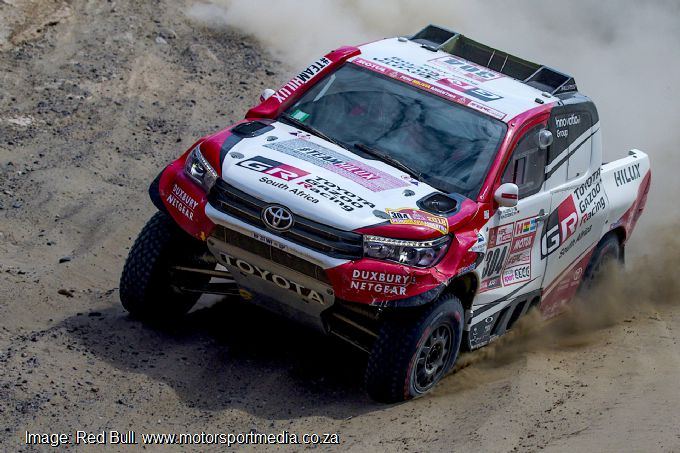 Mr Dakar, as they call him, Frenchman Stephane Peterhansel may have gone into the day’s stage with over an hour’s advantage over Peugeot teammate Carlos Sainz, but not only did the Spaniard win his second cross country stage on the trot, Peterhansel also hit troube early on to lose almost two hours to drop down the field as he struggled to repair his damaged Peugeot with the help and parts of water carrier Despres’ car. Those bush repairs were pretty effective though – Peterhansel’s patched up machine pretty well matched the Toyota pace from when he re-started…
That allowed South Africa’s Giniel de Villiers’ Gazoo Toyota South Africa Hilux into second place for the day, under pressure from teammate Nasser Al Attiyah in what had suddenly turned into a fight for second overall too, as the Qatari hounded the man from Stellenbosch home. Dutchman Bernhard ten Brinke, who had led the Toyota charge in third as the day started, struggled after troubles earlier in the day as he trailed Pole Jakub Przygonski’s Mini, Czech driver Martin Prokop’s Ford and Argentine Lucio Alvarez, driving a Toyota with South African navigator Rob Howie, home in seventh.
Sainz thus moves into the lead by and hour and eleven over Al Attiyah , but Peterhansel pulled off an incredible recovery to limit his slip down the overall standings to third, nine minutes behind the Qatari and all of eight seconds ahead of de Villiers, with Ten Brinke now four minutes adrift in fifth overall.
South African privateers, Hennie de Klerk and Gerhard Schutte had powered the TreasuryOne Amarok out of section 5 in 20th at the time of writing, but they appear
to have run into trouble in sector 6, where they spent over 4 hours before coming through Waypoint 6….
Spain’s Joan Barreda was the first bike home for Honda, taking another stage win to come home two minutes 51 seconds clear of Yamaha-mounted Frenchman Adrien van Beveren. Argentine rider Kevin Benavides competed the day’s podium on another Honda, ahead of Aussie Toby Price’s KTM, Pablo Quintanilla on a Husqvarna and Matthias Walkner on another KTM.
The overall bike race is developing into a thriller as Barreda continues to charge back from his earlier problems — he has closed his deficit to overall leader van Beveren down from being over 22 minutes adrift and 14th overall a week ago, to under 5 minutes as he moved into third. Van Beveren meanwhile retook the overall lead from Benavides at Uyuni today. Barreda however jarred his knee in a crash on stage and limped into the medical tent in some pain on arrival at the bivouac.
Of the South African riders, David Thomas was 45th, Donovan van de Langeberg 55th, Willem du Toit 60th and a little further back Gerry van der Byl was 100th
Sunday’s Day 8 is the big one — not only will crews head straight into 500km of special on the second day of the marathon stage without the comfort of servicing their vehicles, but they face the extreme test of high-altitude sand dunes at some 3500m above sea level following an already sensational first half of the marathon stage on Saturday.