If I say I was not slightly worried when I first had a look at the completely revamped Toyota Yaris Theuns Joubert acquired – I will be lying.

The car looked great – but we were supposed to get it set-up for a tar event the following day and it looked high and it sure as hell was high on its suspension.

I took a quick look at the skyline and saw that there was not a lot of time left for testing before I suspected we were going to be testing the aqua-planing qualities of the Yaris, rather than anything else.

Tjaart had a last minute chat with Theuns and warned him about some or other light that needed to go off before he let loose – so he started warming up the tyres.

Now any navigator will tell you that there is an advantage to know where you are going next and in which direction you are going to turn!

The swerving to get heat into the tyres was still ok, but the fact that I had to peak between the dashboard and the wiper on my side was not. I sat so low I had to stretch my neck to see the road and I never knew where or when Joubert was going to turn as we approached one after the other gap between culverts and to crown it all – when I made ready for a left – he took a right!

Two things I will ever get used to – even not after driving that Nissan Sentra monster with the “straight cut” gearbox many years ago –  are the snapping sound when you change gears and the noise the same fekking gears make when the car stands still, idling.

To my not so sensitive ears (after a season in that mentioned Nissan) it sounded as if there were at least three things broken in that engine. It simply sounds absolutely like an expensive rattle.

Anyway – when all the warning lights went out – at first I thought it was Power shedding – but Joubert put his foot down and off we went. Up and up and down again in the gears without missing a beat.

I thought we were going to do the route once or twice at a sort of respectable speed before we went over into attack mode, but as we got closer to the narrow entry around a circle it became clear that Theuns was in no mood to look around before the attack.

My friend – let me tell you something for free – the handling on the car was not horrible – it was horrendous.

After making sure that I did not shit myself after the first time around the circle – I suggested we go visit Tjaart at the service park and ask him politely to make a few adjustments.

We did that and after one or two James Bond frowns Tjaart got the Yaris to do its best to turn in the right direction when Theuns applied the power – but the car understeered so much that you needed three to four meters of extra space on the outside of any sharp fast corner.

The worrying factor was that I knew that space would not be there the next day!

So we went back again for more adjustments. More frowns, scratching of his head, looking inside, outsdie, downside and upside – adjusting here and there – and off we went.

Every time we stopped the tyres cooled off almost to room temperature and was of no use through the first few corners before we could really test for improvements.

When we completed that specific test corner – Theuns looked at me for my opinion, which of course I did not give – but I looked back at him without making a sound.

He was like tjhe standard waiter coming to ask whether “everything was ok?” just after you filled your mouth with food. You know the ones who nod their heads before they even ask the question and then giving you that thumbs up and a smile while asking so you actually have no option but to say “all is well, no worries!”

“It is better?” Theuns stated with a frown and I confirmed with crossed fingers – not really knowing what to say or suggest, what we needed to adjust before we went out again.

Time was running out and I was not happy at all. It was clear that the suspension set-up was clearly not made for tar – but that we knew before we started.

The goal anyway was for Theuns to get through the next day without any hicups or Evel Knievel tricks.

We went out for a final run and I then suggested that the current set-up was the best we would get it.

Tjaart van der Walt who did one hell of a job preparing the car for a gravel rally – did not look too impressed either – but we knew that short from taking out both front shocks – there was not much we could do.

The car was still understeering – but Theuns adapted his style to accommodate that and we were sort of OK. 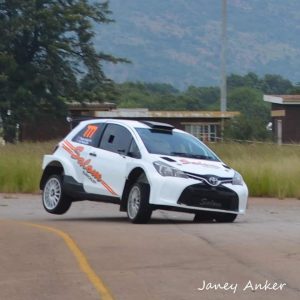 I could not attend the rally so all I could do was  send a message the following morning – not to tell him not to worry about the perfectly tar setup Subarus with more power than Eskom under their bonnets – but to suggest that he squirts the juice just a second later than he thinks he should or where he was used to do that, to try and make up for the handling.

First phone call from the crew was ….yes you guessed it – about the Subarus that was quicker than anything they ever saw before! Not in those exact words but with the same meaning.

They put Theuns on the line but he could not make out a word I tried to say due to bad reception.

Burger laughed for longer than necessary – but when he realised that I was serious he undertook to try.

The Joubert/Yaris/Carl Peskin combo seemed to have worked well as they achieved second overall on an Arro Rally held this weekend, without a scratch on the car!

Now we will start working on getting ready for the first gravel outing – that is what this little monster has been built for and that is where it will show its real talent.

This time around we will have the right tools for the job and Joubert should be able to get his campaign for the championship on its way.

I have already stolen a small cushion from my wife’s interior business – so I will be able to see over the wipers when we hit the road again to make sure that all was good for the first gravel attempt.

Watch out for the white Salom Yaris – it is sure as hell a nice sight-and-sound as it goes by.

Well done to Theuns and Carl and of course Tjaart and co for holding everything together. Much bigger and better effort than I thought would be possible.

p.s New tracks being graded at Rallystar – Super Special, Sprint and Off-road tracks will be completed by end March.

Testing and training by appointment.

This is where we will restart rallying/motorsport for the average guy in the average car at an affordable budget.