De Klerk getting into the Dakar

TreasuryOne Racing duo Hennie de Klerk and Johann Smalberger were all smiles after a fine day in the Arabian Desert following an almost problem free third day of the Saudi Dakar 2020. The Pretoria crew brought their made in SA TreasuryOne Red-Lined Nissan Navara home 36th on the day to move up two positions to 41st in the overall rankings. 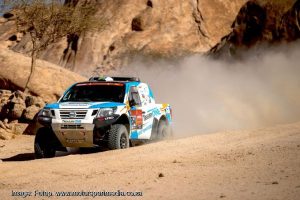 “Besides a puncture not far from the finish and taking a wrong turn along the way, it was a tough but pretty good day,” 2018 Dakar Rookie of the Year Hennie de Klerk explained. “Our TreasuryOne Navara ran like a train as usual — it was dusty and cold this morning, so we paced ourselves until the visibility cleared and then we pushed on at a quick but comfortable pace. “It’s a pity for that flat so late in the day, but we never lost too much time — we’re getting quite good at changing wheels now!
“The team already has our car prepared for an early start tomorrow — it’s going to be a long day with an early start — we have 675km to drive on the way up to Al-Ula, of which 450 are racing through some of the most incredible scenery one can imagine. “Let’s hope we can steal a glimpse of that from time to time!”