Sebastian Vettel claimed his fifth win of the season after beating Valtteri Bottas to victory at the Brazilian Grand Prix.Vettel never looked back after a bold move on the inside saw him take the lead from Bottas in the first corner and Ferrari’s strategy ensured he retained the lead through the single round of pit stops. 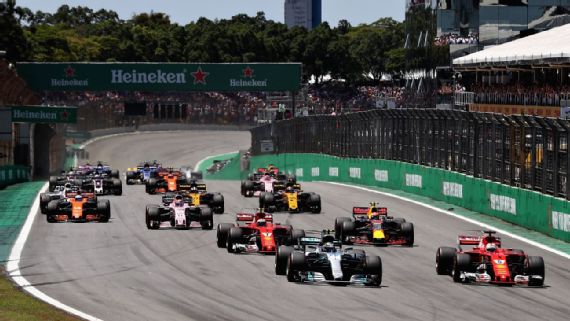 Kimi Raikkonen completed the podium in third — his sixth rostrum appearance at Interlagos — having successfully fended off a late charge from the recovering Lewis Hamilton, who crossed the line just 0.8s behind the Ferrari driver and 5.4s adrift of Vettel in first after starting from the pitlane following his crash in qualifying.

Max Verstappen led Red Bull’s charge in a distant fifth, ahead of teammate Daniel Ricciardo, who recovered from 14th to seal sixth place, while Felipe Massa put in a superb drive at his final Brazilian Grand Prix to claim seventh, pipping former teammate Fernando Alonso to the chequered flag.

Sergio Perez followed the McLaren driver home in ninth to continue Force India’s impressive run of points-scoring finishes, while Nico Hulkenberg rounded out the top ten to score a point that could prove crucial in the battle for sixth place in the constructors’ championship, with the French manufacturer now just four points adrift of Toro Rosso with one round remaining.

Vettel made the better start to jump Bottas off the line, while chaos ensued behind. Daniel Ricciardo spun through the Senna-S curves after receiving what appeared to be a tap from the squabbling pair of Kevin Magnussen and McLaren’s Stoffel Vandoorne behind, who were out on the spot after coming to blows.

In a separate incident just moments later, Esteban Ocon and Romain Grosjean collided on the run to Turn 7. Grosjean slid into the side of Ocon as the pair diced for position and was later handed a 10-second time penalty for causing a collision. Ocon was unable to continue in his heavily damaged Force India, ending his remarkable run of finishing every single grand prix he has started.

Both incidents prompted the immediate deployment of the Safety Car, which led the remaining runners through the pit lane for five laps to allow marshals to clear the debris at Turns 1 and 2. Vettel made the perfect restart when racing resumed to scamper clear of Bottas.

The German build a steady gap of around 2s until Mercedes called Bottas into the pits on Lap 28, in an attempt to undercut Vettel. The move proved unsuccessful, with Vettel emerging fractionally ahead of Bottas having made his own stop on the following lap. Bottas soon began to drop away as he struggled for pace on his fresh set of softs.

Hamilton recovers from the pit lane

Hamilton took advantage of the carnage at the start to move up the order and was into the points by Lap 9 after overtaking Pierre Gasly. Having scythed his way into the top five by the time the leaders pitted, Hamilton found himself in first place.

The newly-crowned world champion continued to light up the timing screens, despite being over 40 laps into his soft tyre stint, before he finally pitted for a fresh set of super-softs on Lap 44, returning to the circuit in fifth position.

Comfortably the fastest man on circuit, Hamilton was into fourth when he swept around the outside of Verstappen on the run to Turn 4 on Lap 59, reducing the deficit to race-leader Vettel in the process as the top four closed up. Hamilton was all over the back of Raikkonen’s gearbox with five laps to go, but lost crucial time following a big lock-up into Turn 1.

Despite Hamilton’s best efforts, he was unable to find a way past Raikkonen to snatch the final podium spot. Vettel, meanwhile, was able to maintain a gap of around 2s to Bottas in the closing stages to record his seventh win in Scuderia colours — his and Ferrari’s first victory since July’s Hungarian Grand Prix.