IT WAS THE SAME 21.3km stage that had proved to be Abbring’s downfall on the final morning, when he went off twice, losing the best part of 20s to Sousa, who had held a narrow lead overnight. 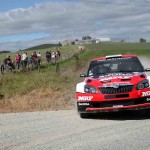 Abbring spent the rest of the day clawing back the gap, while Sousa tried to gauge his pace to keep the young Dutchman behind him. But Sousa won the final stage by 1.1sec to confirm his overall win by 6.2s. Abbring was also left to rue the 10s of road penalties he picked up for starting Friday’s final stage late due to fixing his broken alternator and power steering belt.

“I’m speechless,” said Sousa, who almost did not start the event after a misfire wrecked his qualifying run, which forced him into running first on the road.

“Stage by stage we believed it was possible. The local fans were pushing and cheering me on. This is a dream come true, one of my favourite rallies. I’ve been blown away by mistakes of mine here before, so this win means a lot.”

Abbring was left to rue what should have been victory, but for a series of mechanical and self-imposed mistakes.

“I had a nice pace in the second loop,” he said after the final stage. “But the car surprised me a few times this morning. I tried.”

Jean-Michel Raoux finished third in his Peugeot 207, but was almost eight minutes off the pace.

Vasily Gryazin crashed his Fiesta on the penultimate stage when on course for the final podium spot, and finished some 25 minutes behind the leaders after getting stranded in a ditch.