Stuart White continued in his quest to wrest the Investchem Formula 1600 champion’s Mazda Road to Indy award with another powerful display at the Killarney Extreme Festival races in Cape Town on Saturday. White started by setting a stunning pole position lap and besides a first-race first-corner attack by Cameron O’Connor, cleared off to make it four wins out of four starts for the season as he beat Nicholas van Weely and Siyabonga Mankonkwana to the first race win and then defeated O’Connor and Alex Gillespie in race 2. 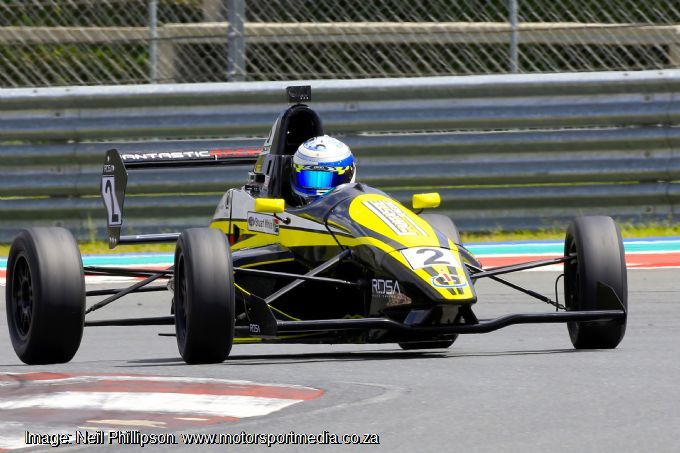 Bloemfontein youngster White served notice of his intent to dominate the weekend with a stunning 1 minute 15.325 lap of Killarney aboard his Fantastic Racing machine to claim an easy pole position, over six-tenths of a second clear of Bedfordview lad Cameron O’Connor (Universal Health). Midrand driver Alex Gillespie (ERP Trucking) was a further tenth of a second behind to share the second row with the returning Liam Pienaar (Phoenix Jewellers), with Dainfern lad Tiago Rebelo next up ahead of Midrand driver Andrew Schofield (investchem).
Linden lad Nicholas van Weely (Magnificent Paints) and Siyabonga Mankonkwana (Cervina) from Sandton shared row 4 ahead of Parkview driver Andrew Horne (Investchem Venpine Xena) and Harmen van Beek, while local lad Joshua Dolinschek (Makita) headed up the sixth row of the grid alongside Franschhoek-based Class B pole man Ian Schofield (Investchem). They were followed by two more Cape drivers, Tristan de Nobrega (RDSA) and Dee-Jay Booysen substituting in the unwell Garth de Villiers’ Durrant machine; Randburg driver Brendan Tracey (Investchem) and troubled local youngster Andrew Rackstraw (RDSA/Investchem).
There was drama at the start of the opening race as White and O’Connor made contact in the first corner, resulting in O’Connor slipping off to be engulfed by the chasing pack as White made off at the front. The field duly sorted itself out through the first corner shake-up and it was Andrew Schofield who emerged in second through all of that, fighting off a struggle between van Weely, Gillespie, Rebello, van Beek and Mankonkwana. Van Weely and Gillespie soon overcame Schofield, while Mankonkwana moved ahead of Rebelo and van Beek, but Gillespie slowed to take an early shower, leaving White to lead van Weely and Mankonkwana home as he won his third race on the trot.
Liam Pienaar had meanwhile worked hard to fight back from tenth to fourth after losing out in that first corner confusion, with Andrew Schofield and Rebelo close behind, as O’Connor came all the way back to seventh ahead of van Beek. Ian Schofield kept clear of the drama around him to pass Joshua Dolinschek for ninth en route to the Class B win with a couple of laps to run, with Tristan de Nobrega, Dee-Jay Booysen and Andrew Horne next up. Brendan Tracey was caught up in the first lap fracas and eventually stopped, while Andrew Rackstraw’s weekend of woe continued when he stopped after a lap with another technical issue.
The second race was a far more straightforward affair as White established the upper hand at the start before driving off to a 4.3-second victory over O’Connor. Gillespie kept a watching brief in third, but Nicholas van Weely had to fight Liam Pienaar off for fourth as the pair diced to the flag with Pienaar just 0.3 seconds adrift over the line. Tiago Rebelo brought it home sixth from Mankonkwana, who fought back after slipping down the field early on, with Andrew Schofield next up from Horne, Dolinschek, Class B winner Ian Schofield, Tracey and de Nobrega.
So Stuart White took pole position, won both races and set the fastest lap of the day en route to overall victory ahead of Nicholas van Weely and Cameron O’Connor, with Pienaar fourth from Mankonkwana, Rebelo, Andrew Schofield, Dolinschek, Class B winner Ian Schofield and Andrew Horne in tenth. All that leaves Stuart white in a commanding championship lead on 43 points out of a possible 44, with Gillespie second on 20 points, O’Connor and van Weely next up on 19 points apiece and Mankonkwana in fifth, a point clear of Andrew Schofield on 12 and Harmen van Beek next up on 11 points apiece.
There’s a short break now before round 3 of the Investchem South African Formula 1600 championships at Pretoria’s Zwartkops Raceway Saturday 12 May where his rivals will simply have one agenda in mind — and that’s to beat Stuart White before he makes off down that Road to Indy a long while before the season is done. The short, sharp Pretoria racetrack is the ideal place to pull that off…