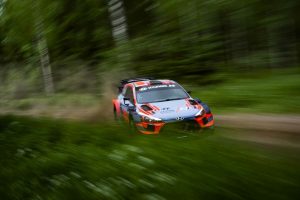 Defending FIA World Rally champion Tänak, along with co-driver Martin Järveoja, won six of the seven stages on Saturday in their first appearance since the ongoing COVID-19 pandemic postponed rallying events around the world.

They defeated Georg Gross, driving a Ford Fiesta WRC by almost two minutes on the stages around Rakvere, with the Hyundai team using the stages as practice for the upcoming WRC round in Estonia that was announced last week.

Gross, the only other stage winner, finsihed a minute ahead of third place Egon Kaur. The Estonian, entered in a Dytko Sport prepared Ford Fiesta Proto was 45 seconds ahead of usual WRC3 driver Raul Jeets who was making only his second appearence in a Škoda Fabia Rally2.

Former Junior WRC regular Roland Poom, competing in his maiden rally in a R5 Hyundai i20 took fifth, although was almost 50 minutes behind rally winner Tänak.