In more than a decade of racing at Bathurst, Shane van Gisbergen had done nearly everything — he has won the 12 Hour race for GT3 cars, taken pole position for that race and the 1000km Supercars race and finished on the podium for that race. But not win it.

Twice in the last five years he had finished second, less than 1s away from the win. In 2020, in the final race of the Red Bull Holden Racing Team, he put that right, along with co-driver Garth Tander.

The win did not come easy. In the opening quarter of the race he had to chase the flying Ford Mustangs of Scott McLaughlin and Cameron Waters, who shared the front row. And the drivers had to prepare for the long-predicted bad weather, which only just materialized: It did rain but only for a few minutes, and not enough to force any of the front-runners into the pits for wet tires. But it was just enough for van Gisbergen to use his amazing wet-weather prowess to move from third to the lead.

From there, he never looked back.

“It’s a race you always want to win and it is good to tick it off. It’s so cool,” he said. “You don’t forget the doubters. The car ran faultless all day, it just got better and better.”

Tander, now a four-time winner, backed him up perfectly.

“The whole team have been fantastic all week — we didn’t have the best car all week but we chipped away. Once Shane jumped in for the final 65 laps, it was seriously good to watch. It was qualifying laps all the way.”

Van Gisbergen may have held the lead when it counted but he had to repel two safety car restart attacks from Waters. ‘SVG’ did that to perfection; in fact, he set the fastest lap of the race on the penultimate, 160th lap.

Veteran Will Davison shared the second-placed Ford with Waters, who finished just in front of Chaz Mostert. His Walkinshaw Andretti United Holden Commodore lacked a fraction of the speed to challenge for the win but was expertly driven by Mostert, the 2014 race winner, and co-driver Warren Luff, who made his sixth trip to the podium in nine years. That’s a notable statistic for a man whose ‘day job’ is that of a stunt driver at the Movieworld theme park on Australia’s Gold Coast…

Fourth and fifth were the two DJR Team Penske Fords. Fabian Coulthard and co-driver Tony D’Alberto managed to gain track position over Scott McLaughlin/Tim Slade, after a safety car period fell awkwardly for them. Slade was two laps short of the minimum 54 laps required for co-drivers, and had to stay in the car (and battle late-stint cramps) as a helmeted McLaughlin watched him lose 10 seconds to the leaders. McLaughlin chased hard but never managed to recover the track position he lost.

Sixth was a great result for Scott Pye/Dean Fiore, whose Holden stopped during the 20-minute warm-up session when the oil pressure disappeared in their Team18/DeWalt Tools entry. The team rapidly got the car repaired, allowing Fiore to make steady progress in the opening two hours of the race.

Lee Holdsworth/Michael Caruso were seventh — Holdsworth particularly hampered by a faulty cool suit in the final two hours of the race — ahead of the second Team18 entry of Mark Winterbottom/James Golding, which lost track position in the final pit cycle.

There were few retirements in the race, but one was highly significant. Jamie Whincup and Craig Lowndes went into the race with a combined 44 starts and 11 wins, and Lowndes made strong early gains. But Whincup made a rash, and rare, challenge on Brodie Kostecki’s Holden at the exit of Griffin’s Bend and clattered into the concrete wall, and into an early shower. 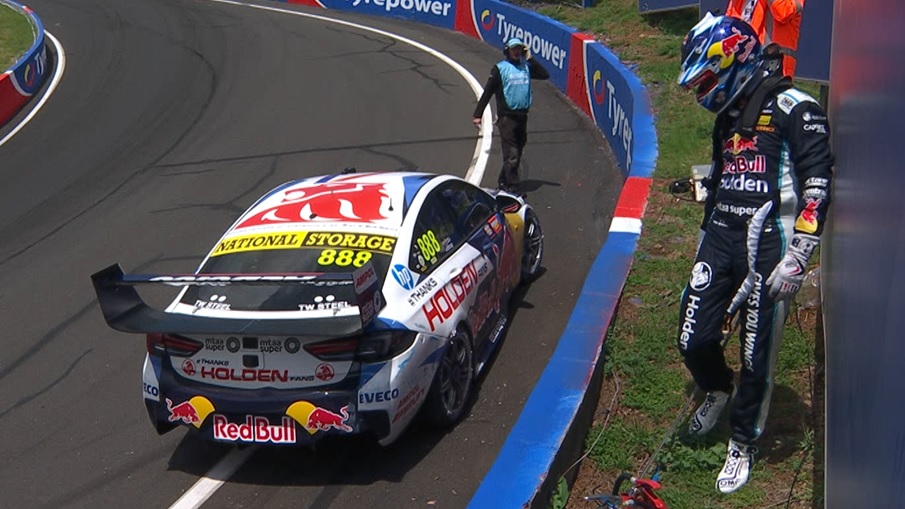 A rare mistake meant an early exit for Whincup…

With Holden withdrawing from the Australian market as well as racing, many would say it was a fitting end. The Commodore will be on the track next season but not with any official backing from GM, while McLaughlin may also leave the grid after three straight titles and a 2019 Bathurst win, to join Team Penske in IndyCar. And doubts remain as to whether Roger Penske will maintain his involvement in Supercars down under.

None of which will be of concern to van Gisbergen and Tander, and their team, for now. In the next few days van Gisbergen will return to New Zealand and Tander to Melbourne after long absences, to be reunited with their families. Thankfully they rubber-stamped the season with a brilliant performance.