TO WEIGH OR NOT TO WEIGH

Many moons, suns and years ago I visited “old man” Giovanni Piazza-Musso and watched him drill small holes in the bonnet hinges of a rally car to reduce the weight of the car. I asked him if it would not be easier if he himself had one plate of paste less per week!

I need not tell you what he told me to go and do!

He could drive a car and also build the lightest rally cars ever.

Anyway – I never really worried about weight and simply learned how to drive the bloody car harder and faster when the need arose. Then I also did not believe in ear-muffs for protection against ear damage on open sections in a noisy car. So today it sounds like mid-afternoon in the Karoo in my head all the time due to “singing ears”.

Hannes Grobler took the lead in this department and openly fired “fat” Piet Swanepoel or at least told him to leave and replaced him with someone lighter. Of course the did not say that at the time, but we all knew that he thought he could do better and jump further with a bit less weight in the car. I can not say if it ever occurred to hm to look in the mirror himself – turning side-ways.

I will not say that this caused the end of larger navigators – but it surely made a number of drivers think about it.

After running Rallystar for more than 12 years and taking many rides with some big customers I have truly learned the value of less kilos.

I lost quite a bit of weight myself after realising the effect an extra 10kg or so has on firstly the suspension of a car and the influence it has on driving.

When I get into a car to go out for a run with an inexperienced driver I always have to make them aware of the effect my weight would have going into corners. It is almost as if you have to “pull” harder when turning “away from the heavier side of the car. You could easily go from an over-steer to an under-steer situation if you are not aware of the problem.

The heavier the crew the more strain it places on the whole car and believe me – when you have to pass the front door of our Lord a few times while trying to beat a determined and talented opponent during an event, you cannot afford any type of handicap in a rally car.

What you can afford least of all is the psychological effect it will have on your performance when you sit behind that steering-wheel and you think about the negatives instead of concentrating only on what you have to do and that is to drive the car as fast as it can possibly go!

Having said that – it is a pity that very few people realise that even fewer people can actually drive any car to or then on its limits.

I always want to cry when I see young inexperienced driver “buying” a second of three per kilometre before they get near driving on the limit with what they have.

If we had a rule that young rally drivers need to drive a “standard” 1600 for two seasons before they were allowed to get into the S2000 daddy bought them for their 14th birthday, we would also have seen much better drivers that what is the case at the moment.

Oh dear – please do not even think for a moment I do not think that every single one of the present bunch is not a world champion – I mean if you do not believe me, ask them or their parents. All I am saying is that we missed that little exercise you need to find the limit of a car and drive it there for a rally or two without landing in hospital or a funeral parlour.

Win a stage in a National Championship overall in a box standard Daewoo 1500 and you will know that I am talking about.

So many aspects are not attended to in modern rallying – and goodness knows I can and probably will one day tell you all, but what is important here is that when you are truly competing for the top spot you need to be surrounded by the best or you better be outstanding – in a class with the likes of Ogier and Latvala and maybe one or two other WRC drivers.

You have to be a super human – able to drive a car over its own limits, quicker than what you should in theory be able to do and then above all – stay on the road for more than a 100 meters.

The dice between Mark Cronje and Leeroy Poulter has now come to that very point – they are evenly matched – so evenly the one simply do not seem to be able to get away from the other. Not on current form and level of development anyway.

Mark my words, one of these days you are going to see a sudden improvement in one of these two or possibly another driver and the game will change once again, but until we get to that new stage we will have to stick with what we got.

In the Ford “24” team – (note: I did not ask anyone of the two personally what the real reasons was) – so all you get here is my own personal opinion or story if you wish – Mark and Robin must have argued the reason why they simply did not seem to be able to keep Leeroy and the Toyota under control for long enough to win events overall. After three wins from the drop of the flag three times in succession by Leeroy Poulter – the frowns must have gotten deeper and deeper between their eyes.

Everything seemed sort of equal except when Robin stood next to Poulter’s navigator – Elvene Coetzee.

If we had to mark the problem area or then handicap in the Ford, about 15% or so of Robin would have been coloured red! He was sure as hell heavier than Elvene and that could mean half a second per kilometre – which would be more than what was needed to get the nose of the Ford ahead of the Toyota again and keep it there. 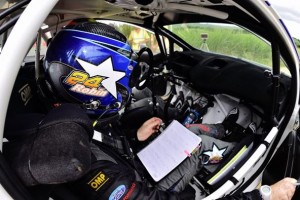 As I expected this to happen a season or two ago, it came as sad news but not a shock to me when I read a statement by Robin announcing that he will be making space for what will definitely be a lighter navigator:

“In recent months it has become increasingly apparent that the current rally regulations unfortunately do not allow persons on my physical stature to compete equally.

Therefore in the interest of giving my #24 team the best possible opportunity to win the overall title I have decided to step out of the Ford Performance Fiesta indefinitely.

I am still going to assist the team (especially my navigator replacement) behind the scenes on the remaining rallies to ensure a smooth transition, and hopefully by having the Ford Performance Fiesta at the same all-in weight as everyone else the team will be able compete for the overall driver’s championship on a level playing field.”

This is all good and well, but a new navigator in a car, especially next to a driver who has come a long way with his present navigator, holds its own challenges. It is sort of like a blind date and I assume the selection would have been a very careful process.

If the new relationship works, I will tell you one thing for free and that is that Leeroy will have to go dig deeper to stay with, let alone ahead of Cronje, but if it does not work – Leeroy will defend his title successfully without too much sweat.