In other words, all things are relative.

When Johann Zarco attained 225.2mph/362.6kmh during last Saturday’s FP2 session at Losail some MotoGP commentators and fans were aroused into a state of wild excitement, although the riders seemed less impressed

It has always been thus.

I once asked three-times 500cc world champion Wayne Rainey what’s the fastest he’s ever been.

So, how did it feel?

“It felt like it needed another tooth off the rear sprocket,” he answered.

So the speed itself meant diddly squat to Rainey, his only concern was getting the gearing right. Not a hint of a buzz and certainly no fear.

Zarco’s speed record aboard his Pramac Ducati Desmosedici GP21 is about 90mph faster than the bikes that contested the earliest premier-class world championships in the late 1940s and early 1950s.

Geoff Duke’s factory Norton 30M, which he rode to the 1951 world championship, was good for 135mph and probably a bit more when hurtling down Bray Hill on the Isle of Man. Duke’s 500cc single made around 40 horsepower, which means that since then top speeds have increased by 66%, while horsepower has increased by 650%, which tells you all you need to know about the relationship between engine power and aerodynamics.

When Valentino Rossi joined the premier class in 2000 the best top speed was achieved at Mugello (of course) by Garry McCoy and his Red Bull Yamaha YZR500 at 197.5mph/317.8km/h.

So does Rossi – the man who has seen it all – think that 225mph is too fast and too dangerous?

“About the danger, for me anything more than 330 [205mph] is very dangerous, so 360 is an incredible number,” he said. “I think motorsport fans are very excited by this number because it’s impressive, but for sure this speed is dangerous.”

In fact riders have been concerned about the speed of MotoGP bikes since the very beginning, or at least since Daijiro Kato lost his life as a result of a high-speed accident during the 2003 Japanese GP, the first race of the second season of the 990s.

“These 990cc four strokes are now very big weapons and they’re starting to make some of the GP tracks look small, especially at full speed,” said McCoy at the time. “Just like in Formula 1 some years ago, it seems the bikes are perhaps beginning to outgrow some of the tracks we race at. The bikes are both faster and heavier than the 500s ever were. This is something that everyone in the sport needs to take into account when considering safety.”

The result of Kato’s death was the 2007 introduction of 800cc MotoGP bikes. In fact this 190cc reduction of engine capacity did nothing to improve safety. The 800s were slightly lighter than the 990s, so they were immediately faster around the corners – where most crashes happen – and in the very first 800cc MotoGP race Casey Stoner broke the Losail lap record by more than a second! And by 2009 the 800s were also faster on top speed.

Zarco didn’t have much to say about his record-breaking speed last weekend. “It was two things,” he said. “The slipstream [behind Enea Bastianini’s Ducati] and braking late.” A tailwind also helped.

Ducati has almost always had the fastest bikes in MotoGP – the fastest Desmosedicis make at least 300 horsepower – but as we saw on Sunday night brute power doesn’t always count for much. 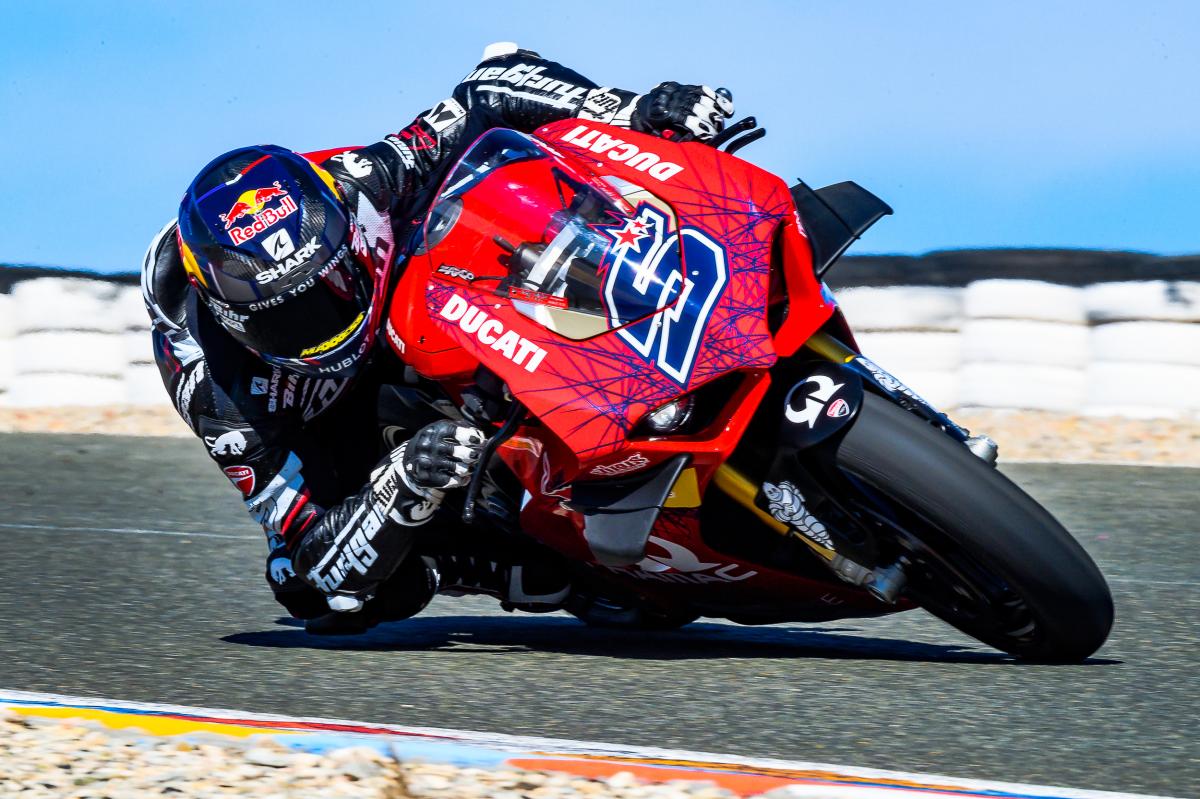 Downforce wings reduce wheelies, so you can get on the throttle harder and sooner, which increases your corner-exit acceleration. But that positive becomes a negative once you’re in the upper gears, because downforce creates drag, which slows you down.

In the last two years Ducati has worked to mitigate this negative. First, the shapeshifter, designed primarily to increase acceleration by changing the bike’s corner-exit geometry, also helps at high speed, because by dropping the rear of the bike it also drops the trailing edges of the wings, thereby reducing drag.

This year’s lower-fairing aero – used by Zarco in his 225mph run – is the next step in making the Desmosedici less draggy.

The aero features downwash ducts on either side of the fairing that flows high-pressure air under the fairing, where the turbulent, low-pressure air creates drag. By increasing air pressure in this area, it makes the bike more aerodynamic. It also cleans up the airflow at the back of the bike, making it more difficult for riders to slipstream the Ducati and use its speed to help increase their speed.

Slipstreaming is one of the coolest things about motorcycling. Every race bike leaves a pocket of low-pressure air immediately behind it. If you are chasing that bike you work to get yourself into a position where you can get into that pocket of low-pressure air. If you do get there the wind resistance you are working against decreases dramatically, so you suddenly accelerate at a crazy rate, like you’ve pressed the turbocharger button.

Then, all being well, you will use the extra speed you’ve stolen from your rival to jump out of his draft and rocket past.

Riders shed blood, sweat and tears in their efforts to go faster around racetracks, so when you get free speed from a rival it’s one of the best feelings in racing.

So, is 225mph too much? Yes and no. You could argue that 150mph is too much because it’s not going to be good if you hit something hard at either of these speeds. The secret to saving lives and limbs is track safety and riding kit.

MotoGP begins a new five-year technical regulations term next season and there are no plans to rewrite the current rules.