One driver who has been eager to get to grips with the new Odyssey 21 is Mattias Ekström. The Swede, who will line up for season one alongside Nürburgring Nordschleife specialist Claudia Hürtgen, has driven a plethora of cars during his career to date but reckons those with off-road experience will get off the marks quicker come the opening race weekend in Saudi Arabia.

Speaking to DirtFish, Ekström said: “The drivers who are only starting to prepare on gravel now, will probably get a big wake-up call on the first round I think because you can expect the top guys to be the ones with off-road experience.

“If you’re not familiar with gravel driving, you will be surprised how fast you can go; speed is one thing but when the roads get rutted up, that’s another thing.

“And that’s what happened to me when I was new to gravel driving, I got a big slap on the face in the desert on the Dakar. But I was fortunate to get a few miles under my belt on the Dakar, so I would be surprised if the non-rally and rallycross drivers are quicker initially. I think they will be in for a big surprise.”

Ekström admits that when he first drove the Odyssey 21, he was not so impressed on low power’ but that perception quickly changed as he was able to experience the full 550hp capabilities of the car, which has been designed and built by Spark Technology, the same company which produces the Formula E cars.

Perhaps it is surprising that as yet only one driver with Formula E (race) experience has signed up for Extreme E, as one of the main differentiating features between combustion and electric cars is the sound.

No, we’re not talking about the pet peeve of many a motorsport fan, bemoaning the lack of external noise from cars. Instead, the noise inside the cars has an impact on the drivers. Not least Ekström who believes this area of electric racing is of primordial importance.

“When it comes to all the driveability, things you experience and know while driving a combustion engine car with a gearbox, versus an electrical car, are different,” the 2016 World Rallycross Champion explains. 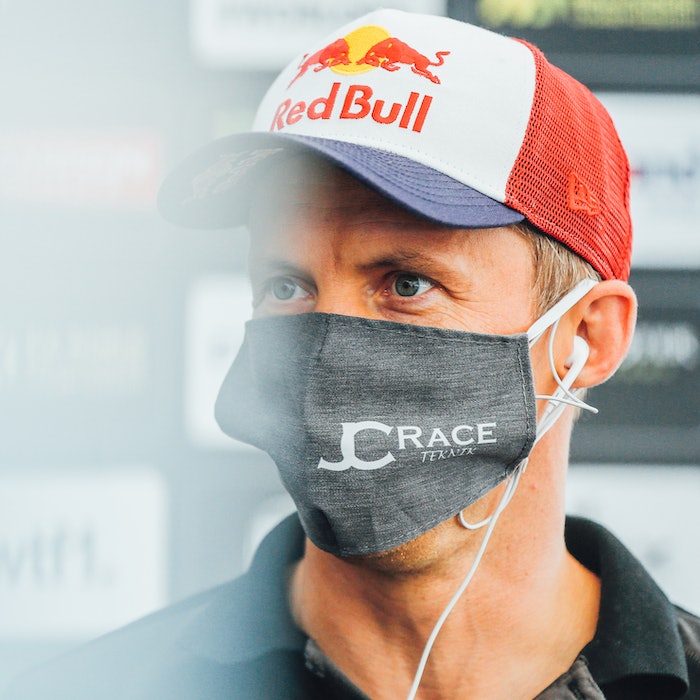 In the Extreme E car, it feels like the engine is revving higher and higher all the time, to 20000rpmMATTIAS EKSTRÖM

“And it’s something which you think would be easy to learn with an open mind. But still, the perception of what speed you are doing is hard. Normally, in a combustion engine car, you know roughly the speed you are doing based on what gear you are in, in an electric car, there is just one gear.

“In the Extreme E car, it feels like the engine is revving higher and higher all the time, to 20000rpm. And it still sounds different when you are accelerating, but when you are in the braking zone, to have a different feeling of engine braking – which we don’t have – and no front diff or rear diff like we have in a rallycross car and a solid connection between the front end and the rear, it’s a big difference.”

The Odyssey 21 speaks a similar language to that of the Andros Sport 01 car which is used in the all-electric ice-racing eAndros Trophy in that throttle modulation for braking and cornering becomes as crucial to lap-time as racecraft and not making mistakes. But while eAndros Trophy relies on copious amounts of sideways drifting to maintain momentum, Ekström believes a smoother approach is the key to getting the most out of the Odyssey when things kick off in Saudi Arabia.

“The difference from the first test to now is quite big, so the challenge will be knowing how to drive it quicker than everybody else.

“Very soon in the shakedown, I understood what the limiting factors would be, as soon as you feel that and understand that you get a good feeling on the set-up, but we will see what everyone else does.

“The car is a bit more nervous to drive as sometimes the front wheels spin more than the rear wheels, and you are relying on the electronics to compensate for it. But the engineers will have a bit more time to smooth things out.

“It’s nice to have all of these things but the driver needs to have the confidence to push it to the limits.”

Pushing the limits in another way is, according to Ekström, exactly the modus operandi of Extreme E, which aims to raise awareness of climate change and the effect it is having on the planet’s natural landscapes.

The way future mobility of the car manufacturing industry links with motorsport is something Extreme E boss Alejandro Agag is keen to emphasize, and Ekström believes manufacturer involvement in the series can serve as a launchpad for the years to come.

“If you look at the automotive industry, there will be more and more electric vehicles coming in the future,” Ekström says.

“There is still some time for people to digest what future mobility will look like, and some manufacturers put a lot of money into electric, and to ignore it would be totally wrong.

“I think they will look at motorsport a little bit differently in the future as well, so the classic way of motorsport will be a lot less; Extreme E, rallycross or many other categories which are suitable for electric. And I think those categories will be very strong for electric in the future. But again, to do motorsport without manufacturers is possible, but it’s definitely not easy. Because for me, the biggest part who profits from motorsport is the car manufacturer, and I think it will always be that way.”

Although Extreme E’s opening round in AlUla was pushed back by a month owing to the ongoing impact of COVID-19, the inaugural event is an eagerly anticipated event that is likely to shape the future face of off-road and cross-country. Ekström, alongside the other 19 expected contenders will hope their efforts in making Extreme E a reality will pay off.