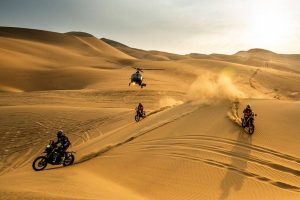 The changes have been put on the table after the 2020 running of the event saw multiple big crashes in the bike class, with two riders, Paulo Gonçalves and Edwin Straver, tragically loosing their lives.

To try and reduce some of the risk involved in the event, organisers have four plans to reduce the speed of the bikes and increase safety.

The first is to try and tailor the stages in such a way that the fast stages – which see bikes topping 115mph on dirt – are re-routed to try and prevent such high speeds.

The second phase is to introduce a power limiting device that will help to quell some of the acceleration and prevent the bikes from reaching such high top speeds.

The organisers are also looking at doing away with roadbooks, a system the rider must manually move as they progress along the route – in favour of a more 21st-century alternative. The new system will offer visual and audible warnings to the rider, helping them to maintain focus on the road ahead and not on turning the page of their roadbook.

The move could also see airbag suits become mandatory for all motorcycle competitors, regardless of the class they are racing in. Dakar organisers plan to hold meetings with manufacturers prior to next year’s event to tailor the kit to the demands of the world’s most extreme off-road motorcycle race.