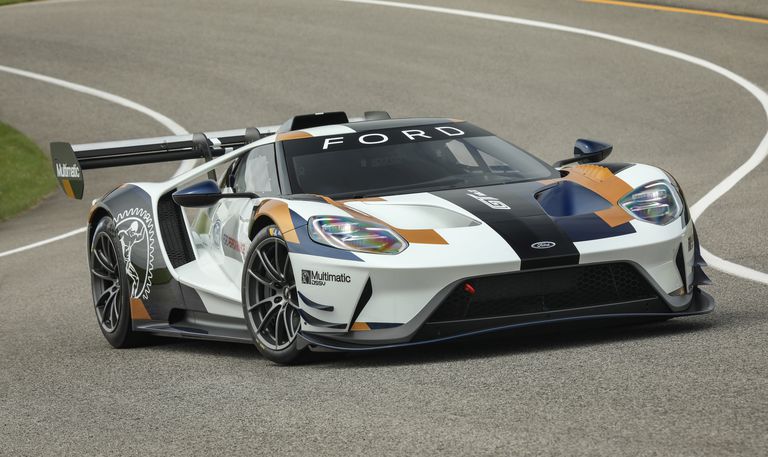 After being teased a few weeks ago, Ford has unveiled the GT Mk II at the Goodwood Festival of Speed in the U.K. As we expected, it’s a track-only version of the GT supercarthat has been developed using knowledge gained from the GT’s soon-to-be-over racing program. The GT road car is limited in design and engineering by global homologation requirements, while the Le Mans–winning race car is bogged down by racing class restrictions and regulations, so the designers and engineers were able to go wild with the Mk II, as it doesn’t need to adhere to any set of rules.

Immediately noticeable is the massive rear wing that replaces the regular GT’s active rear spoiler. Ford says that the dual-element wing “exceeds” the downforce produced by the race car’s wing. Other aerodynamic enhancements include a huge rear diffuser, a new front splitter, louvered front fenders, and dive planes on the front bumper. Ford says the Mk II makes over 400 percent more downforce than the roadgoing GT and that it will pull over 2 g’s of lateral grip.
The GT’s twin-turbocharged 3.5-liter V-6 EcoBoost engine has been tuned to 700 horsepower, 53 more than the road car and 200 more than the race car. It uses the same seven-speed dual-clutch automatic as the road car, albeit with new tuning, and the Mk II remains rear-wheel drive. A new roof-mounted air intake looks awesome and feeds the auxiliary clutch, engine, and transmission coolers. There’s also a new high-capacity air-to-air outboard-mounted charge air cooler that automatically sprays water on the charge air cooler at high temperatures to maintain a consistent high power level. 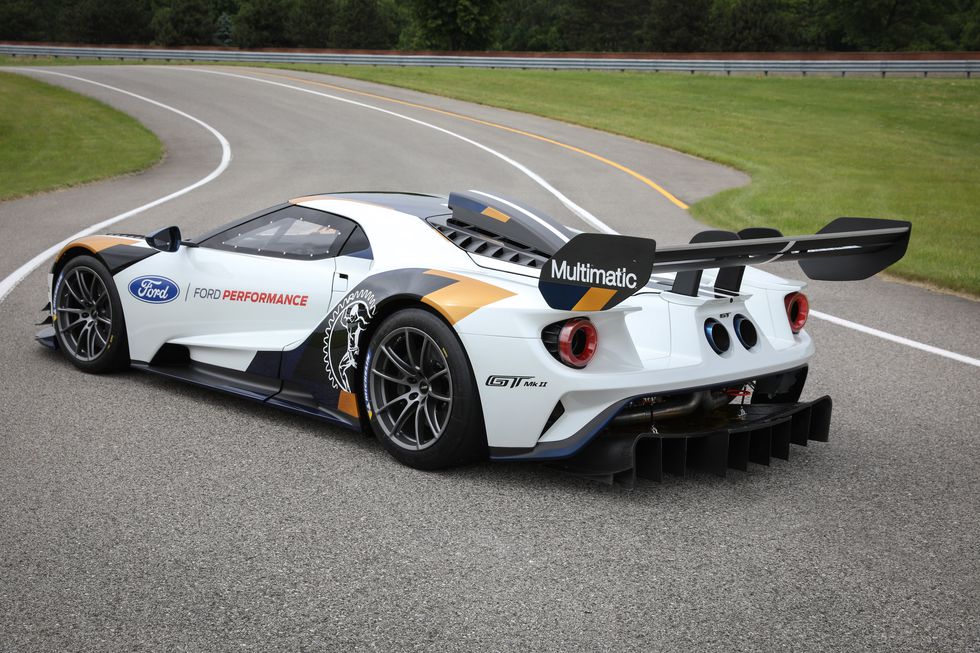 Ford says the Mk II is more than 200 pounds lighter than the road car thanks to the removal of the adjustable ride height and multiple driving modes. Instead, there are five-way adjustable shocks along with a fixed, lower ride height. The Mk II uses the road car’s carbon-ceramic brakes, while new 19-inch wheels are wrapped in Michelin Pilot Sport GT slick racing tires.

The interior has been stripped out, with a dashboard even simpler than that of the road car, a rectangular race-car steering wheel, and a number of new controls. A display mounted on top shows info from a MoTeC data acquisition system as well as the view from the rear camera. The driver sits in a Sparco racing seat that has a six-point harness; a passenger seat is optional.

Ford says that only 45 units of the Mk II will be built at $1.2 million each, which is around $700,000 more expensive than a regular GT, and it will be sold directly to customers by Multimatic, not Ford. The Mk II will start production at the regular Ford GT’s plant in Markham, Ontario, before being brought to a “specialist facility” at Multimatic to be finished.
Source: Car and Driver