Mercedes have said the “gloves are off” with Red Bull after a contentious weekend of stewards decisions and an on-track collision. It began with the Milton Keynes-based outfit formally protesting the new DAS system on Friday, arguing it contravened regulations on suspension and aerodynamic influence, but that was thrown out after lengthy deliberation.

Then on Saturday, Mercedes was in a league of their own in qualifying, claiming the front row by over half a second from Max Verstappen in a dominant display.

On Sunday though, Red Bull asked to review a decision not to penalise Lewis Hamilton for failing to slow under yellow flags, presenting new footage from his 360-degree camera posted on social media as new evidence.

The stewards validated that review and duly gave Hamilton a three-place grid penalty, dropping him from second to fifth.

“I thought the protest on Friday was actually fair play, but not on Sunday,” Mercedes boss Toto Wolff said of Red Bull’s actions.

“Coming back on Sunday morning, turning around a decision from yesterday, if you have new evidence, that is what the rules allow, you have to take that on the chin.

“But coming back to your question – the gloves are off.”

In the race, a great battle was starting to emerge between Verstappen and the two all-black Silver Arrows before electrical issues took the Dutchman out of the running.

But later Alex Albon threatened to spoil Mercedes’ day as he switched to soft tyres under the second safety car while Mercedes stayed out on used hards.

For the second time in three races, however, the Thai driver would collide with Hamilton, earning the world champion a five-second penalty and the wrath of Red Bull bosses.

“Be careful!” team boss Christian Horner told Autosport of what he’d advise Albon to do differently the next time he battles Lewis.

“Alex didn’t have the straight-line speed, so he knew he had, with the grip advantage, to pass him in or out of a corner.

“As far as he was concerned, the job was done [around the outside at Turn 4]. He was starting to look down the road towards Valtteri [Bottas] when Lewis put a wheel on the inside.

“So I think it is more perhaps Lewis that the questions should be asked on what he would do differently.”

“If someone is so obviously guilty and then only gets a time penalty of five seconds and thereby remains in the points, then that’s simply not fair,” he told TV broadcaster ORF.

“I think it’s time to rethink this whole system!”

“I would say from my perspective the five seconds were too harsh,” he said.

“We looked at the video now a couple of times and Lewis had full [steering] lock in the corner and Albon had about 40 per cent of the track left to make the corner. 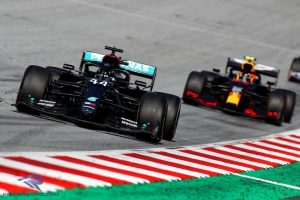 “It was different to [an incident on] Lap 1 where Lewis had to back out of Albon pushing Lewis, so in my opinion, it was not justified. But I understand the complexity of the job [of the stewards] and some go for you and some go against you.”

Hamilton himself accepted the decision and apologised to Albon post-race, insisting there was “no bad blood” between them.

But if all this is a precursor to what’s to come in 2020 and 2021, as the current cars will be retained, we say bring it on!
Source: insideracing.com