In the 1970s, Italian automaker Lancia had become a force to be reckoned with in the World Rally Championship series with cars like the Fulvia and Stratos, the latter winning three overall WRC championships consecutively in 1974-’76. By the end of the 1970s, the FIA had announced that a new rally car class would lead the WRC series starting in 1982. 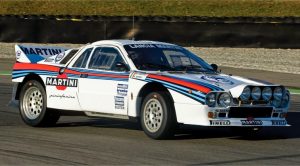 The class was the soon-to-be-infamous Group B, and the machines that would be realized from its less-stringent (yet still production-based) build regulations would earn notoriety as some of the fastest and most spectacular ever produced before the class’s cancelation for safety reasons in 1986.

In 1980, with just two years to develop an all-new car for Group B, Lancia chose to use its Montecarlo road car (sold as the Lancia Scorpion in the U.S. ) as a basis, just as it had done with the Lancia Beta Montecarlo Turbo Group 5 endurance car.

Like that earlier road racer, the Lancia 037 was developed with help from Fiat Group’s Abarth and Italian design studio Pininfarina, which also styled the original Montecarlo road car. Just the central tub was taken from the Montecarlo; each end of the tub was fitted with a custom tube frame to mount an optimized double A-arm independent suspension system, with twin shock absorbers in the rear.
The 2.0-liter Fiat Group Lampredi twin-cam inline-four engine was mounted longitudinally in the 037, and fitted with a supercharger developed by Abarth that was based on the production Volumex unit used in some road-going Fiats and Lancias. The widened bodywork was made of Kevlar composite, and the requisite 200 road cars for homologation were fairly easily built by Pininfarina and Abarth. The homologated road-going version was officially called the Lancia Rally 037 Stradale (stradale meaning “street” in Italian).
Just 217 Lancia 037s were built between 1982 and 1984. None were sold new in the United States, as they didn’t meet Department of Transportation safety or emissions regulations. Today, there are several Lancia 037 Stradales in the U.S., courtesy of federal importation laws for cars that are at least 25 years old.
Lancia 037 Highlights

As mentioned, the primary impetus behind the development of the Lancia 037 was to contest the WRC’s Group B rally car class. The 037 represented about the last of the competitive rear-drive cars in the series, facing tough competition from the new all-wheel-drive Audi Quattro race cars.

As it went, Lancia’s 037 often excelled on tarmac and gravel rallies, while the Quattro cleaned up in looser conditions and in inclement weather. Nevertheless, with drivers Walter Röhrl and Markku Alen, Lancia won the 1983 WRC Constructor’s Championship. By the end of the 1984 season, even more all-wheel-drive competition began to render the 037 obsolete, and it was replaced with the all-wheel-drive Lancia Delta S4 by the 1986 WRC season.