Harry Tincknell fended off a determined Dane Cameron by 0.227s to win in the No. 55 Mazda RT-24P started by Jonathan Bomarito, after blocking — and bumping — the No. 6 Acura ARX-05 in Turn 5 on the final tour of the 4.048-mile circuit.

After running the table in practice and qualifying, Acura Team Penske carried that domination through the first hour of Sunday’s IMSA Road Race Showcase. However, that all changed early in the second hour when Harry Tincknell passed a very defensive-minded Juan Pablo Montoya on the outside of Turn 1 on Lap 38. From that point, Tincknell led 41 of the next 45 circuits — including the final 31.

However, Cameron was not to be denied, closing to the rear wing of the Mazda in the run to the white flag. He made several moves to pass on the final circuit, but could not find a way around Tincknell.

“I have nothing left,” Tincknell admitted. “I just pushed as hard as I could the whole way. It wasn’t easy to get by Juan Pablo. Then, at the end, I was just hanging on for dear life. The traffic went against me a little bit, so I was hoping at the end it would be with me – and it did.”

Oliver Jarvis and Tristan Nunez made it a double-podium finish for Mazda in the Canadian Tire Motorsport Park-winning No. 77, placing 3.114s back. It was the second triumph of the season for Tincknell and Bomarito, who gave Mazda its first IMSA Prototype victory at Watkins Glen International on June 30.

Felipe Nasr and Pipo Derani proved to be the “best of the rest,” placing fourth in the No. 31 Whelen Engineering Cadillac DPi-V.R. The second-place finish allowed Cameron and Montoya to add two points to their lead, with Nasr and Derani now unofficially seven points back (239-232) with only two DPi rounds remaining. 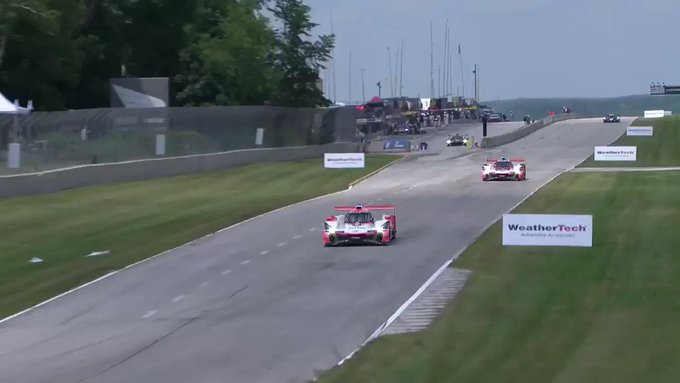 The No. 7 Acura started second by Helio Castroneves led for 15 laps following the opening round of pit stops. Ricky Taylor took over and was running second when he ran over debris that resulted from an altercation between two GTD competitors. Taylor had to pit and fell back in the running order, eventually finishing seventh.

The two-hour, 40-minute race ran under the green flag from start to finish.

Ford Chip Ganassi made it three consecutive victories at Road America, with Richard Westbrook and Ryan Briscoe winning in the No. 67 Ford GT. It was their second straight triumph of 2019, backing up their recent triumph at Lime Rock Park.

“Today was the polar opposite of Lime Rock,” Westbrook said. “We won there on a three-stopper, and today we made the two-stopper work. In the end, it was quite comfortable: watch the fuel, watch the tires. Just a great run.”

Joey Hand finished second in the No. 66 Ford GT started by Dirk Muller, 10.657s back, followed by the No. 912 Porsche GT Team 911 RSR of Earl Bamber and Laurens Vanthoor. The No. 912 Porsche now holds a 14-point lead with three rounds remaining.

Tommy Milner made his return to action an impressive one with a fourth-place finish in the No. 4 Corvette Racing C7.R started by Oliver Gavin. Milner had sat out two races after being injured at the start of the Sahlen’s Six Hours of The Glen. The Corvette was running second with five minutes remaining, but needed a late splash of fuel to make it to the checkered flag.