After an extremely tough and challenging Mpumalanga 400, the opening round of the 2021 South African National Cross Country Series (SACCS) that played off at Dullstroom this weekend, 26 and 27 March, it was the brand new Ford Castrol Cross Country Team Ranger in the hands of Lance Woolridge and Elvéne Vonk that made history by winning the event overall while the team also scored full marks in the FIA Class of the Production Vehicle Championship. 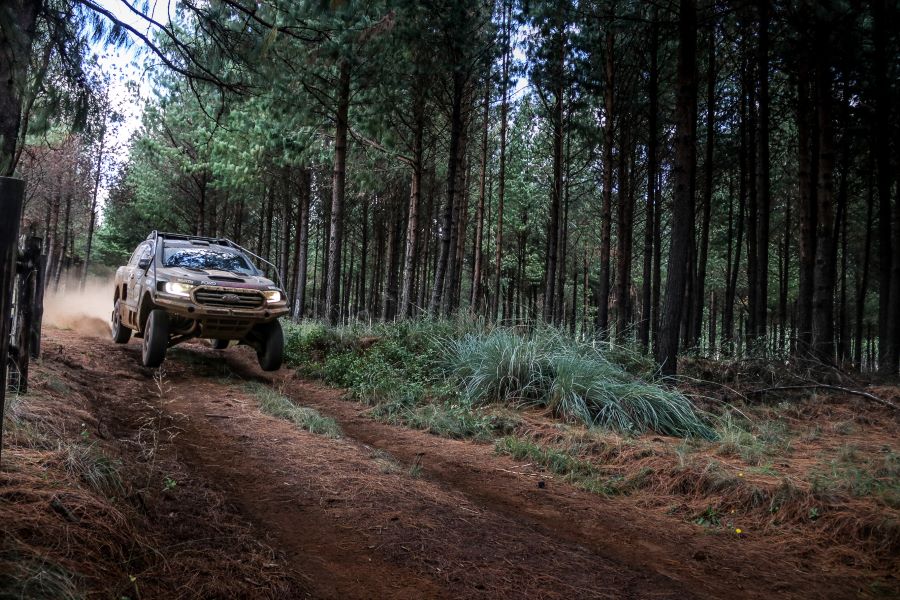 This event is known for presenting teams with a challenge and this year was no different with initially dusty conditions combined with a route that was both rocky and treacherous as it was muddy and slippery, albeit spectacularly scenic. This was also the first Super Event of the season and teams had to complete a short 10km Pirelli Qualifying Race as well as a 100km loop on Friday, 26 March while another two loops awaited them on Saturday, 27 March for a total race distance of almost 400 kilometres.

Woolridge/Vonk won the short Qualifying Race and posted the third fastest time in the Production Vehicle Category on Friday and after a steady day in the office that included two punctures, the team claimed their first podium of the 2021 season winning overall as well taking the honours in the FIA Class. Their time was 7:51:12. It is the first time that a different manufacturer, other than Toyota, won the Mpumalanga 400 since its inception four years ago.

Joining them on the overall podium were the Class T winners, defending champions Johan and Werner Horn (MalalaneToyota Hilux) who were also the fastest in their class on Friday. Their time of 7:54:58 was just 3 minutes and 46 seconds slower than the winners after they kept their noses clean during the race.
The rookie SACCS driver and multiple SA National Rally Champion, Guy Botterill, standing in for Henk Lategan behind the wheel of the Toyota Gazoo Racing SA Hilux while the latter recovers from a shoulder operation, claimed his first SACCS podium by finishing second in the FIA Class and third overall with navigator, Brett Cummings (7:57:06).

Botterill/Cummings started Saturday as the second car on the road behind Brian Baragwanath/Taye Perry (Century Racing CR6) who retired with a broken gearbox. The team showed their mettle with a bent wishbone after hitting a rock, their only major issue on Saturday. Botterill/Cummings had to fight for their podium position as the second of the new Ford Castrol Cross Country Team Rangers in the hands of Gareth Woolridge/Boyd Dreyer (7:58:38) were chasing hard to finish third in the FIA Class and fourth overall despite two punctures and losing time when they hit a tree while in the lead. They missed the overall podium by a mere 92 seconds.

Ernest Roberts/Henry Köhne (8:02:14) brought the first of three of the four Red-Lined Motorsport VK56 vehicles home in fifth place overall and fourth in the FIA Class, just over three and a half minutes behind the Ford Ranger.

Giniel de Villiers/Dennis Murphy (Toyota Gazoo Racing SA Hilux) pulled out all the stops on Saturday after losing lots of time on Friday due to having to race for 80 kilometres without power-steering. They had to claw their way back after starting 25th overall and their efforts were rewarded as they posted the fastest time on Saturday with the combined results of the two days placing them sixth in the Production Vehicle Category and fifth in the FIA Class (8:03:51), only a minute and 37 seconds behind Roberts/Köhne. 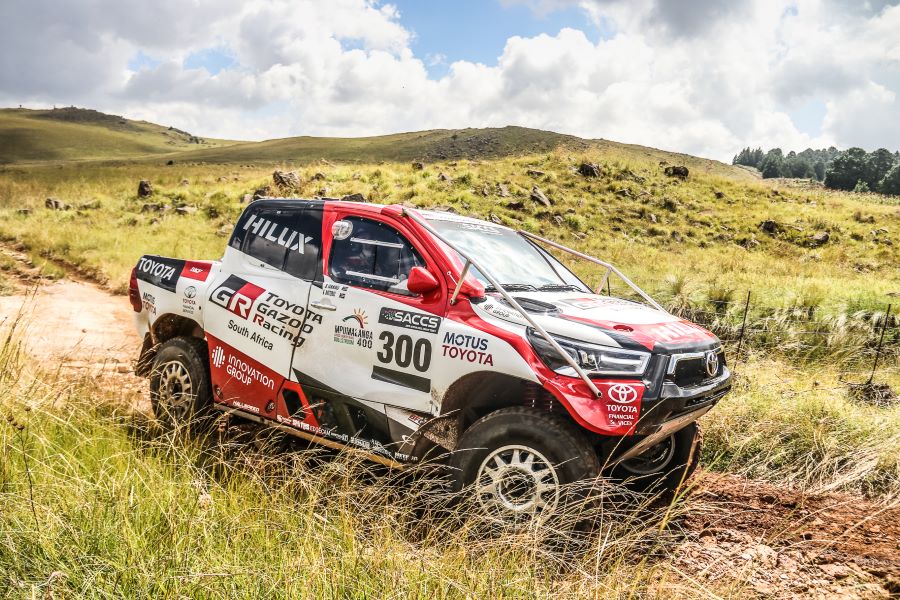 The teams finished close together and only 36 seconds separated De Villiers/Murphy from Mark Corbett/Rodney Burke (Century Racing CR6) who clinched seventh place overall and sixth place in the FIA Class championship (8:04:27) after a pretty un event full day in the car.

They were followed by two father and son teams, Johan and Sean van Staden (Moto-Netix KEC Racing Renault Duster) who were seventh in the FIA Class (8:09:17) and Malcolm and Frans Kock (Neil Woolridge Motorsport Ford Ranger) also scored their first silverware of the season when they finished second in Class T. They were ninth overall with newcomer Eben Basson opening his SACCS tally next to experienced navigator, Gerhard Schutte (Red-Lined Motorsport VK56) with a healthy haul of points finishing 10th overall and eighth in the FIA Class.

The event took its toll on the vehicles and only 15 teams managed to receive the chequered flag in the Production Vehicle Category. Christo Rose/Arno Olivier, who moved to the Production Vehicle Championship after competing in Class G for Side-by-Sides in the Special Vehicle Category last season, opened their scorecard with a fine podium result finishing third in Class T while they were 11th overall.

Another former Class G driver, Dewald van Breda, made a come-back after not competing since 2019 and together with navigator Johann du Toit, finished 12th overall and ninth in the FIA Class in the Century CR5. They went well until a kilometre before the finish when they fell into a dam.

Two more teams competing with Ford Rangers under the Neil Woolridge Motorsport banner, Wors Prinsloo/André Vermeulen and the husband and wife duo of Bernard and Minette Johnstone finished fourth and fifth respectively in Class T and 13th and 14th overall, with the Johnstone pair pulling Van Breda/Du Toit out of the dam. Philip Botha/Roelof Janse van Vuren brought the third Red-Lined Motorsport VK50 home in 15th place and 10th in the FIA Class.

Among the race casualties were Shameer Variawa/Danie Stassen (Toyota Gazoo Racing SA Hilux) with Variawa being cleared to race on Saturday after hurting his back on Friday. They had to retire 30 kilometres before the finish as a result of suspension damage. Both the Schalk Burger Motorsport King Price Xtreme teams of Schalk Burger/Henk Janse van Vuuren and Thilo Himmel/Armand du Toit will be going back to the drawing board as will Conrad Rautenbach/Riaan Greyling (Red-Lined Motorsport VK56).

The Mpumalanga 400 was once again an enjoyable event for the big field of competitors and set the scene for an exciting 2021 season.