Toyota and Porsche both claimed the top two steps of the podium in Round 1 of the 2019/20 FIA World Endurance Championship at Silverstone.  The 4-hour race in the UK saw safety car periods and rain showers mixing up the racing action and providing drama and excitement for the large British crowd. 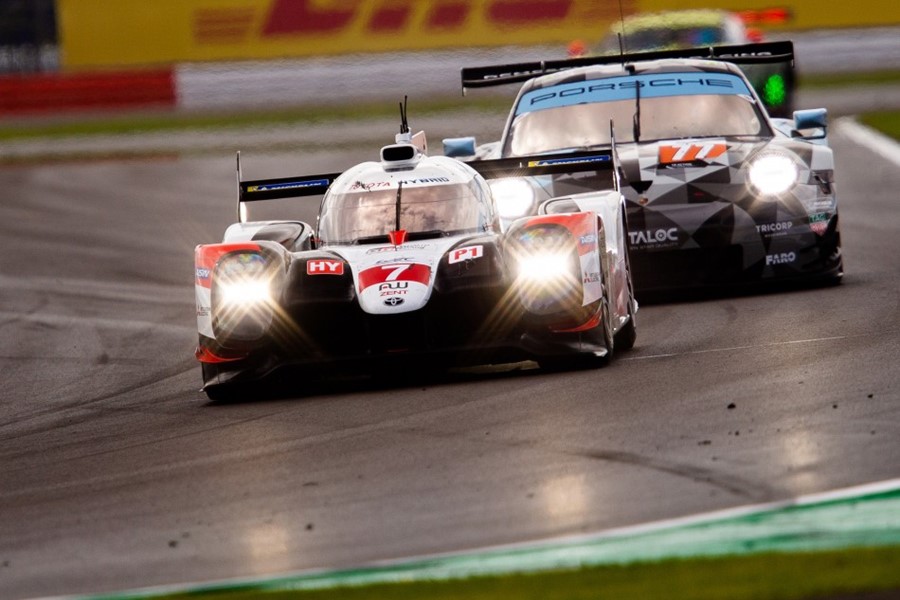 The no7 Toyota TS050 Hybrid of Mike Conway, Kamui Kobayashi and Jose Maria Lopez take the top step of the podium by just 1.9 seconds at the end of the 4 Hours of Silverstone, with the no8 Toyota of Brendon Hartley, Sebastien Buemi and Kazuki Nakajima in second spot.  Rebellion Racing finished third and fourth with the no3 R13-Gibson of Pipo Derani, Loic Duval and Nathanael Berthon taking the final podium place.

In the LMGTE Pro category the Porsche GT Team were very pleased with a 1-2 finish on the brand new Porsche 911 RSR-19’s WEC debut.  The no91 911 of Gianmaria Bruni and Richard Lietz was the first across the line, just ahead of the reigning world champions Michael Christensen and Kevin Estre in the no92 Porsche.

The no97 Aston Martin Racing Vantage of Alex Lynn and Max Martin took the final podium place, capitalising on a late race penalty for the no51 AF Corse Ferrari of Alessandro Pier Guidi and James Calado, who finished fourth.

It was a debut win for the no42 Cool Racing Oreca, with Nico Lapierre and Antonin Borga sharing the driving in the 4-hour race following Alexandre Coigny’s accident in yesterday’s ELMS race, the Swiss driver suffering from a cracked pelvis.

Lapierre had to pit five minutes from the flag to change a tyre but the Frenchman brought the car home to finish ahead of the Signatech Alpine Elf A470, with Thomas Laurent overtaking the no29 Racing Team Nederland Oreca of Frits Van Eerd on the last lap of the race.

In LMGTE Am the no83 AF Corse Ferrari of Francois Perrodo, Emmanuel Collard and Nicklas Nielsen took the first win of the season, finishing ahead of the no98 Aston Martin Racing Vantage of Ross Gunn, Darren Turner and Paul Dalla Lana in a competitive eleven car class field.

The no86 Gulf Racing Porsche was set to take second place but Ben Barker was forced to take a stop for fuel with a few minutes left on the clock, dropping the British team down to fourth behind the no70 MR Racing Ferrari