Toyota Gazoo Racing will be over two seconds slower than their Rebellion rivals for the upcoming Lone Star Le Mans round of the FIA World Endurance Championship. 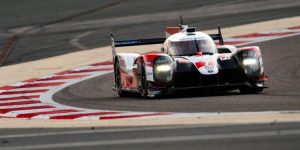 In a technical bulletin released by the Endurance Committee on Wednesday, the championship-leading #7 Toyota TS050 Hybrid of Mike Conway, Kamui Kobayashi and Jose Maria Lopez will be slowed by 2.77s compared to the virtual reference car, while the #8 Toyota of Sebastien Buemi, Kazuki Nakajima and Brendon Hartley loses 2.21s.

The calculations for the round at Austin have changed from the previous rounds as a so-called ‘virtual car’ is now used to calculate the Success Handicap. This is because the gap between the championship leader and the last car in the standings, the #6 Ginetta G60-LT-P1 – AER, now exceeds 40 points.

The method that was now used, was to subtract 40 points from the points tally of the championship leader, putting the virtual car on 56 points. The difference in points between this amount and the points for Rebellion and Toyota were then used to calculate the handicap for each car. Each points difference was multiplied by the length of the Circuit of the Americas (5.51 kilometers) and WEC co-efficient of 0.01255 to create the resulting outcome.

The only other LMP1 car on the grid, the #1 Rebellion R13-Gibson of Bruno Senna, Norman Nato and Gustavo Menezes, loses 0.55s. Due to the one-two finish for the Toyotas at the previous round in Bahrain, the gap between the Toyotas and the Rebellion has been increased even further.