With only three rounds remaining in the 2014 Donaldson Cross Country, the action moves to the spiritual home of off-road racing in South Africa, Vryburg. For Castrol Team Toyota, current championship leaders, it will be an opportunity to consolidate and build on their success earlier in the season. 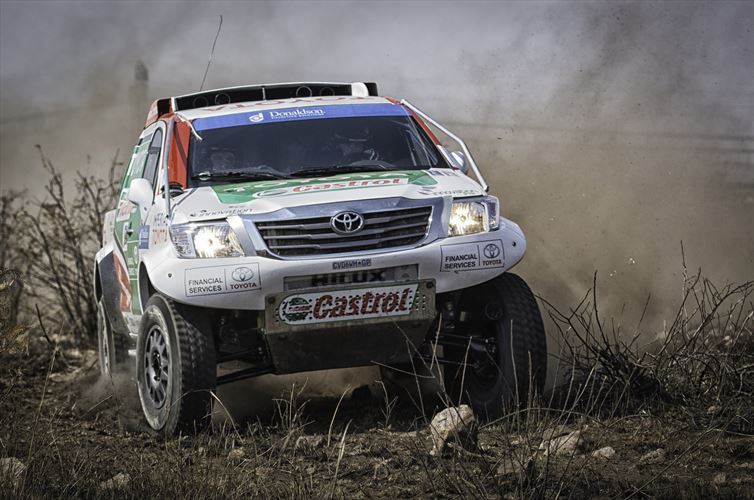 Defending champion Anthony Taylor, with navigator Dennis Murphy beside him, has banked 100 points so far this season, thanks to four victories (including both heats of the Toyota 1,000 Desert Race. He leads the championship by three points over Toyota privateers Johan and Werner Horn, in the Malalane Toyota Hilux.
“Anthony needs to finish the Vryburg 450 and score some points. If he wins, that’d be great too, but we can’t take any chances,” says Castrol Team Toyota Team Principal Glyn Hall. “This is a tough race, and after his DNF at Sun City last month, the pressure is on.”
That pressure, ironically, currently comes from fellow Toyota drivers, the Horn brothers, who have surprised everyone with their spectacular pace and professional approach to cross-country racing. With Johan behind the wheel, and Werner reading the notes, the pair have notched up three third places, one second place and one victory – a consistent performance that sees them just three points behind Taylor/Murphy in the Castrol Team Toyota Hilux.
Completing the Top Three is relative newcomer Leeroy Poulter (Castrol Team Toyota Hilux), with navigator Rob Howie next to him. Poulter, an established and highly experienced motor sportsman, joined the cross-country fraternity this year, and has shown great pace from the get-go.
While he is still hunting for a maiden victory, the Johannesburger has scored points in all but one round of the championship, including three second-places and one third-place finish. Poulter is currently 15 points behind Johan Horn in the overall standings.
“Leeroy will be testing some new parts for our Dakar programme,” says Hall. “But even so we’re expecting him to do well in Vryburg. Both the car and the driver is certainly quick enough to win!”
With that said, the reality is that the Vryburg 450 is the fifth round this season to feature new terrain. Only a small portion of the route will be familiar to the crews, and even though Poulter is now in the top-seeded group, he’ll still have his work cut out in the rough bush around the towns of Vryburg, Louwna and Excelsior.
To many fans, the Vryburg 450 as it is now known, is Toyota’s territory. Even though the name and route has changed steadily over the years, the area around Vryburg has been the backdrop for many Toyota victories. So much so that the names of Apie Reyneke and Kassie Coetzee are synonymous with the event, and Toyota is looking forward to strong support from its local fan-base during the race.
In addition to the two Castrol Team Toyota Hiluxes, fans can also expect to see the Horn brothers in action in their very fast Malalane Toyota Hilux; as well as Deon and Jason Venter, who each field a 4×4 Mega World Toyota Hilux (Deon in Class S; and Jason in Class T).
The race is based at the Vryburg Motor Club, near the town itself. This also serves as home of race HQ and the Designated Service Park (DSP). The race kicks off on Friday, September 12th at 11:30 with a 100 km-long prologue, which is used to determine the start order for the main race. The 350 km main event starts at 08:30 the next morning.