The Phillip Island round of the 2019 Motul FIM Superbike World Championship from February 22-24 will be the first to host three races for the famed production bike series. Schedule confirmation came in overnight from international organisers, Dorna and the FIM, with the expanded three-race formula (see below for full Phillip Island WSBK Schedule), for the island’s 2019 WorldSBK season opener, backed by Yamaha Finance. The agenda also features world supersport action and the launch of national championships for Australian superbike, supersport and supersport 300 categories.

Thirteen races will be held on Saturday and Sunday, with the extension of the WorldSBK platform for the first time since the title’s inception in 1988 delivering an exciting new frontier for teams and riders – as well as a boon for spectators

The two 22-lap WorldSBK battles around the 4.45km circuit will remain – to be held at 3:00pm on Saturday and Sunday – but they will now sandwich a 10-lap sprint race at midday on Sunday.

And unlike the longer WorldSBK races at Phillip Island, where rear tyre conservation is always a major part of the strategic mix, the sprint race will be a no-holds-barred affair where the likes of defending champion Jonathan Rea (Kawasaki) and WorldSBK rookie Alvaro Bautista (Ducati) will be pushing at 100 per cent from start to finish.

Points will be allocated to the first nine finishers in the Tissot-backed sprint race, while, as per tradition, the top 15 across the line in the 22-lap races will put points in the bank.

As for the WorldSBK preliminaries, the number of practice sessions has been reduced from four to three across Friday and Saturday morning, and there will be just one Superpole qualifying session on Saturday afternoon – a structure that will also be replicated in world supersport.

Superpole results in WorldSBK will decide the grid for race one and the sprint. The sharp end of the field in race three will then be determined from the first nine positions in the sprint – and from 10th onwards based on Superpole performances.

Moreover, both BMW and Ducati are fronting at Phillip Island with all-new bikes, while BMW and Honda have recommitted to the championship with factory-backed teams. It all adds up to a crackerjack weekend – and season – of WorldSBK racing!

Meanwhile, the 18-lap world supersport race will be held at 1:15pm on Sunday.

As well as the four world championship races, the Phillip Island WorldSBK round will also feature nine races across the Australian Superbike, Supersport and Supersport 300 categories – three each across Saturday and Sunday as the seven-round national series kicks off in earnest.

In superbike, that means the return of WorldSBK legend Troy Bayliss, who completed the 2018 domestic title at Phillip Island with some stunning front-running battles against Josh Waters and Wayne Maxwell.

However, it’s Troy Herfoss who’s the reigning Aussie superbike champion, and he’ll be out to kick off his defence in fine style at Phillip Island as well. 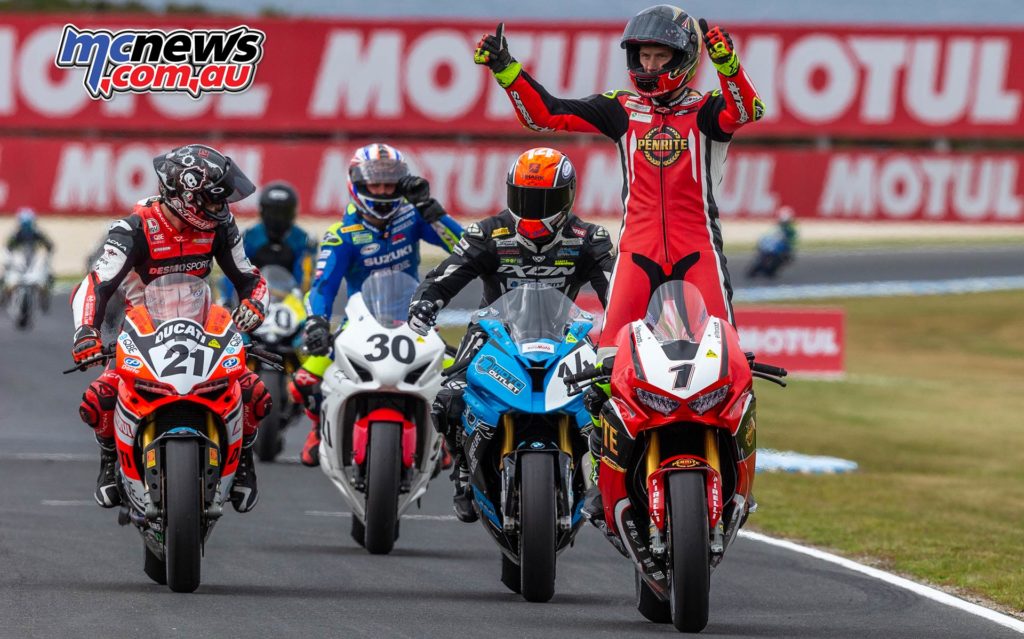 Add all the practice, qualifying and racing elements together and that means a flurry of on-track action at Phillip Island from Friday to Sunday.